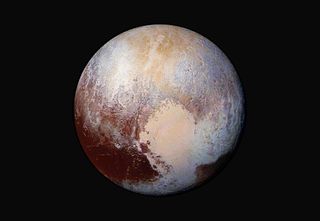 The first-ever flyby of Pluto may have raised more questions than it answered.

And that's just on Pluto itself. New Horizons' observations also revealed that Charon, the dwarf planet's largest moon, sports a canyon system at least 650 miles (1,050 km) long and a dark polar cap that researchers informally named after Mordor, the realm of the evil wizard Sauron in J.R.R. Tolkien's "Lord of the Rings" trilogy. [See more Pluto photos from New Horizons]

Making sense of all the new information — that is, getting a relatively complete understanding of the evolution of Pluto and its five moons — is going to take some time, said New Horizons principal investigator Alan Stern, of the Southwest Research Institute in Boulder, Colorado.

"It's really complicated," Stern told Space.com. "This is going to be a very tough story to unravel."

Pluto is the most famous denizen of the Kuiper Belt, the ring of frigid bodies beyond Neptune's orbit. The dwarf planet was discovered in 1930 but remained mostly mysterious for the next 85 years because it's relatively small and lies so far away. (On average, Pluto orbits about 39 times farther from the sun than Earth does.)

But the $720 million New Horizons mission has given Pluto its first close-up. On July 14, the spacecraft zoomed within just 7,800 miles (12,550 km) of the dwarf planet's surface, capturing a variety of data about the Pluto system with seven different scientific instruments.

Over the past three months, mission scientists have been releasing flyby images and observations, as well as their interpretations of this information, in a series of news conferences and press releases. And now the mission team, led by Stern, has integrated many of these findings and more in its first scientific paper based on close-approach data.

For example, the new study, which came out online today (Oct. 15) in the journal Science, reports the discovery of Norgay Montes and Hillary Montes, the water-ice mountain ranges on Pluto that rise 1.2 miles to 1.9 miles (2 to 3 km) above surrounding terrain, as well as other, lower peaks.

Some of these smaller mountains may in fact be icebergs, massifs that are separated from the bedrock and float on a sea of frozen nitrogen, said study co-author Bill McKinnon, deputy leader of New Horizons' geology, geophysics and imaging team at Washington University in St. Louis. [Flying Over Pluto: Ice Mountains and Young Plains (Video)]

The paper also provides details about Sputnik Planum, the huge frozen plain that Norgay Montes and Hillary Montes abut. Sputnik Planum has no detected craters, suggesting that the landscape there has been resurfaced within the last 100 million years — extremely recently in the scope of geological time.

That revelation came as a big surprise, because many scientists had suspected that Pluto and other Kuiper Belt objects (KBOs) have long been "dead" internally.

"Finding that Pluto is geologically active after 4.5 billion years — there's not big enough typeface to write that in," Stern said. "It's unbelievable."

Some other icy bodies, such as Saturn's moon Enceladus and the Jupiter satellite Europa, remain geologically active today. But their activity is generated by the powerful gravitational tug of their giant parent planets. Something else must be going on with Pluto, whose orbital dance with Charon produces no such internal to-and-fro.

That "something else" is likely heat generated by the decay of radioactive elements such as uranium and thorium deep inside Pluto, McKinnon said.

"You can even have an interesting sort of [heat] storage mechanism," McKinnon told Space.com. "If you have enough heat released during Pluto's early years, you can melt ice and form an ocean — but the ocean's on the inside, and as it refreezes, it will give back that heat."

Sputnik Planum also appears to host glaciers of frozen nitrogen, carbon monoxide and methane, and some parts of the plain feature dark streaks that were probably created by Plutonian winds. Then there are those polygonal cell-like structures, whose origin continues to puzzle scientists.

The blocks may be the result of contraction processes similar to those that create the cracked appearance of dry lake beds here on Earth, mission scientists have said. Or they may be formed by heat from Pluto's interior, in the same way that heat drives the motion of fluids in a lava lamp.

New Horizons also discovered that hazes in Pluto's tenuous atmosphere extend about 93 miles (150 km) above the dwarf planet's surface — much higher than expected. [Is Pluto's Atmosphere Collapsing Like A Comet's? (Video)]

New Horizons wasn't solely focused on Pluto during the flyby; the probe also studied the 750-mile-wide (1,200 km) Charon as well as the tiny satellites Nix, Hydra, Kerberos and Styx, all of which are less than 35 miles (48 km) across.

The close approach revealed Charon to be a complex and varied world as well; the moon harbors a bizarre "mountain in a moat," for example, in addition to the giant chasm system and reddish polar cap.

Furthermore, New Horizons found what appears to be a big, reddish crater on Nix, suggesting that the icy satellite may be dark beneath its mostly white surface. Hydra is also quite reflective, and study team members aren't quite sure why.

"How such bright surfaces can be maintained on Nix and Hydra over billions of years is puzzling, given that a variety of external processes (e.g., radiation darkening, transfer of darker material from Charon via impacts, impacts with dark Kuiper Belt meteorites, etc.) would each tend to darken and redden the surfaces of these satellites over time," they write in the new paper.

New Horizons' observations also have allowed mission scientists to nail down the sizes of the non-spherical Nix and Hydra, which measure 33 miles (54 km) and 27 miles (43 km), respectively, in their longest directions.

Data about Styx and Kerberos hasn't come down to mission control yet. (New Horizons' full flyby dataset won't reach Earth until next August or September, team members say.) People shouldn't expect spectacular images of these two tiny moons, both of which are just a few miles across and weren't discovered until after New Horizons' January 2006 launch.

New Horizons' observations have also greatly reduced uncertainties about Pluto's size, finding that the dwarf planet is 1,475 miles (2,374 km) wide, give or take about 5 miles (8 km).

The measurement reveals that Pluto is only about 10 percent denser than Charon, McKinnon said. And this knowledge should shed light on the long-ago giant collision that researchers think formed the Pluto-Charon system.

"It's not actually clear that Pluto and Charon are that different in terms of their bulk composition, so it kind of changes the boundary conditions of the giant-impact model," McKinnon said.

For example, the data seem to suggest that the ancient collision involved bodies that were relatively similar and mostly undifferentiated — that is, neither colliding object possessed a large ice mantle that was blown into space.

But, in keeping with Pluto's puzzling nature, there's more to the story here as well — namely, the apparently icy makeup of Nix, Hydra and Styx, which are thought to be shrapnel thrown off by the giant impact. (Kerberos seems to be much darker.)

"If they're made of ice, then it means there must have been an ice layer," McKinnon said of the tiny moons. "It's not all obvious how everything fits together."

Taken as a whole, New Horizons' results to date suggest that the Kuiper Belt and other distant realms harbor many complex and fascinating bodies, Stern and McKinnon said.

"Just because something's far away from the sun and has a lot of ice on its surface doesn't mean it's cold and dead," McKinnon said. "There's probably stuff going on on all sorts of dwarf planets out there beyond Neptune."

New Horizons may end up getting an up-close look at a second KBO — not another dwarf planet, but a small, primitive chunk of material left over from the solar system's formation nearly 4.6 billion years ago. The spacecraft will fly by a roughly 30-mile-wide (48 km) object called 2014 MU69 in January 2019, if NASA approves and funds an extended mission for the probe.