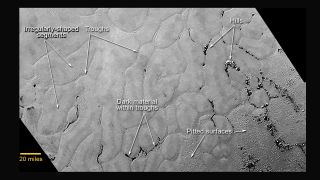 This annotated view of part of Pluto’s Sputnik Planum region shows an array of enigmatic features. The photo was acquired by NASA’s New Horizons probe on July 14, 2015 from a distance of 48,000 miles (77,000 kilometers). Features as small as 0.5 miles (1 km) across are visible. The blocky appearance of some features is due to image compression.
(Image: © NASA/JHUAPL/SWRI)

Not far from a range of giant ice mountains on Pluto lies a vast stretch of icy plains whose surface is broken into cell-like blocks by snaking troughs, new photos by NASA's New Horizons spacecraft reveal.

The engimatic region — which the mission team is calling "Sputnik Planum," after the satellite launched by the Soviet Union in 1957 — also features isolated hills of uncertain height, mysterious pitted terrain and dark streaks of material that may have been deposited by Plutonian winds. You can fly over Sputnik Planum in this amazing video, which NASA released today (July 17).

Sputnik Planum is devoid of craters, indicating it has been reshaped by geological activity in the very recent past. The area cannot be more than 100 million years old, and may in fact still be active today, researchers said.

"This could be, you know, only a week old, for all we know," said Moore, who heads New Horizons' geology, geophysics and imaging team. "Pluto is every bit as geologically active as any place we've seen anyplace else in the solar system."

The ice plains lie in the center-left of Pluto's famous heart-shaped feature, a bit north of mountains that rise 11,000 feet (3,500 meters) into the dwarf planet's sky. Troughs course through the landscape, cordoning off blocks of land that are each about 12 miles (20 kilometers) wide.

The polygonal blocks may be the result of contraction processes similar to those that create the cracked mud in dry lake beds on Earth. Or they may be signs of convection driven by heat from Pluto's interior, creating "the same sorts of patterns you see when you look at the surface of a boiling pot of oatmeal, or like the blobs in a lava lamp," Moore said.

The dark streaks, which are several miles long and appear to be aligned, are similarly unexplained at the moment. Wind may be involved in their creation, either through deposition or erosion, but it's also possible that some sort of plume or geyser activity is responsible, Moore said.

"These are the early days of the post-encounter analysis," Moore said, referring to the work being done following New Horizons' Tuesday (July 14) close flyby of Pluto. "We're still entertaining, as you can tell, the widest range of hypotheses. We are acutely aware that jumping to conclusions comes at great peril."

New Horizons team members released other new photos and information today as well. For example, they revealed that the west side of Pluto's "heart" is rich in carbon-monoxide ice, unlike the rest of the dwarf planet, and they announced that the probe had detected Pluto's thin, nitrogen-dominated atmosphere out to a distance of 1,000 miles (1,600 km) from the surface.

Furthermore, New Horizons spotted a cloud of ionized nitrogen gas extending at least 68,000 miles (109,000 km) beyond Pluto. This "plasma tail" is evidence that the atmosphere is being stripped by the solar wind and lost to space. The rate of escape will be nailed down when more data come down to Earth next month, but team members offered an estimate today.

"What we think it is, based on models and a pretty good guess, is about 500 tons per hour of material that is escaping," said Fran Bagenal of the University of Colorado Boulder, who leads New Horizons' particles and plasma team.

For comparison, Mars is losing about 1 ton of its atmosphere per hour, Bagenal added.

Mission team members also released today the first-ever good photo of the small Pluto satellite Nix. (Pluto has five known moons: Charon, which is half as wide as the dwarf planet itself, and Nix, Hydra, Kerberos and Styx, all of which are tiny.)

The new image reveals that Nix is about 25 miles (40 km) wide, and intermediate in reflectivity between Pluto and Charon, researchers said. (Charon is considerably more reflective than Pluto.)

All of this new information is but a trickle compared to the flood to come, however. New Horizons has beamed home less than 2 percent of the data it collected during its historic flyby, and NASA has yet to release any images taken at or near closest approach, when the probe was just 7,800 miles (12,500 km) from Pluto's surface.