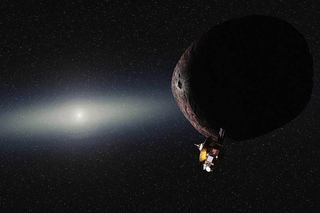 Artist's impression of NASA's New Horizons spacecraft encountering a Pluto-like object in the distant Kuiper Belt. NASA announced on Aug. 28, 2015, that it had selected 2014 MU69 as its first choice for the probe's secondary mission.
(Image: © NASA/JHUAPL/SwRI/Alex Parker)

NASA's New Horizons probe, which flew past Pluto last month, now has a second target to aim for.

The New Horizons team has selected an object named 2014 MU69, which lies roughly 1 billion miles (1.6 billion kilometers) beyond Pluto, as the next target for up-close study by the spacecraft, NASA announced today (Aug. 28).

However, the space agency still must officially approve a New Horizons mission extension for the second flyby to take place in 2019. [Destination Pluto: NASA's New Horizons Mission in Pictures]

"Even as the New Horizons spacecraft speeds away from Pluto out into the Kuiper Belt, and the data from the exciting encounter with this new world is being streamed back to Earth, we are looking outward to the next destination for this intrepid explorer," John Grunsfeld, chief of the NASA Science Mission Directorate, said in a statement.

The $720 million New Horizons probe traveled for nearly 10 years and 3 billion miles (4.8 billion km) to reach Pluto and its moons, becoming the first mission to study the dwarf planet system up close. It will take roughly 16 months for the probe to beam home all the data it collected during the encounter.

The successful July 14 flyby already ensures that New Horizons will go down in history as a roaring success, but the odds are good that the spacecraft will be collecting more data in the future. NASA commonly approves mission extensions for spacecraft that have finished their primary objective and are still in good working order.

Still, the New Horizons team must submit an extension proposal to NASA that will "be evaluated by an independent team of experts before NASA can decide about the go-ahead," the statement said.

That proposal is due in 2016, but the New Horizons team must start planning for an encounter with 2014 MU69 right away. The team will execute a series of four maneuvers in October and November of this year to put the probe on a path to encounter the new object. Any later course corrections will require more fuel and "add mission risk," the statement said. If the extension is approved, the probe is expected to reach 2014 MU69 on Jan. 1, 2019.

Alan Stern, principal investigator for New Horizons at the Southwest Research Institute in Boulder, Colorado, called 2014 MU69 a "great choice," for the secondary mission. Discovered in 2014 by the Hubble Space Telescope, scientists estimate it is just under 30 miles (48 km) in diameter, or between 0.5 and 1 percent the size of Pluto.

In 2014, Hubble identified five objects that New Horizons could potentially reach after its encounter with Pluto. The list was later narrowed down to two prime candidates, including 2014 MU69.

The Kuiper Belt is a largely unexplored region of the solar system; NASA's twin Voyager probes passed through it, but did not make close encounters with any objects, including Pluto. Scientists believe objects in the Kuiper Belt have remained largely unchanged since the formation of the solar system 4.6 billion years ago, and may therefore serve as a kind of time capsule, containing clues about the formation of Earth and its cosmic family.