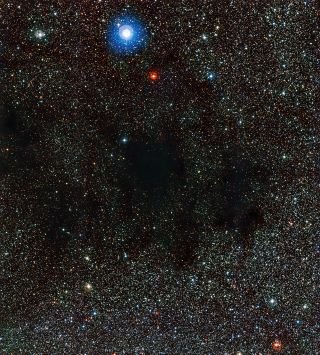 This new image featuring the Coalsack nebula was taken by the Wide Field Imager on the MPG/ESO 2.2-meter telescope.
(Image: © ESO)

The enormous, inky smudges of the Coalsack nebula blot out a patch of the brilliant Milky Way in a new image from the European Southern Observatory (ESO) — but someday, that murky realm will burst into light.

You can see a video tour of the Coalsack nebula here, incorporating the new image. The view comes from the MPG/ESO 2.2-meter (7.2 feet) telescope at ESO's La Silla Observatory in Chile.

Europeans first came to know of the Coalsack nebula in 1499, when it was described by the Spanish explorer Vicente Yáñez Pinzón. It was later nicknamed the "Black Magellanic Cloud," in reference to the two bright Magellanic Clouds, also visible in the southern sky. The Magellanic Clouds are dwarf galaxies near the Milky Way, whereas the Coalsack is simply an immense collection of dust.

The Coalsack's notable darkness, in contrast to other, brightly glowing nebulas, comes from the dust's coating in frozen water, nitrogen, carbon monoxide and other simple organic molecules, ESO officials said in a statement. The particles block visible light from traveling through almost entirely — and the little background starlight that makes it through appears be slightly redder, because the dust scatters blue light more readily than red.

Like all nebulas, the thick, murky dust of the Coalsack may someday burst into light.

"Millions of years in the future, the Coalsack's dark days will come to an end," officials wrote in the same statement. The thick interstellar clouds of dust are fuel for future stars. "As the stray material in the Coalsack coalesces under the mutual attraction of gravity, stars will eventually light up, and the coal 'nuggets' in the Coalsack will 'combust,' almost as if touched by a flame," they wrote.