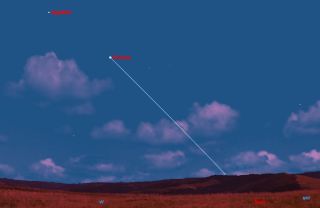 Venus is one of the most prominent planets in the night sky this month. On Saturday, June 6, the planet will be at its best.
(Image: © Starry Night Software)

With the northern summer just a few weeks away, the month of June is bringing a delight of planets in the night sky for stargazers to enjoy, but only if weather permits and you know when and where to look.

As June kicks off, Saturn can be found low in the southeast at dusk, with the nearly full moon shines a few degrees away. Venus, meanwhile, will reaches its greatest elongation from the sun on June 6 and is approaching its maximum brightness, though as the month progresses the planet starts appearing noticeably lower in the sky than in recent months.

On June 14, Mars will begin its trip behind the sun, so prepare to say farewell to the Red Planet until it becomes visible again in August. Other planetary treats include Jupiter and Saturn shining bright in the night sky. [See Asteroids and Dwarf Planets in June's Sky (Video)]

With that in mind, here's a look at some of the must-see planet events in the June night sky. Remember, when measuring the angular separation between two celestial objects, your clenched fist held at arm's length measures roughly 10 degrees.

June 6: Venus dominates the west after sunset for another month. It reaches greatest elongation (45 degrees east of the sun) this evening. By pure geometry we would expect the planet's disk to look half-lit (called dichotomy), like the first quarter moon. But in a small telescope (at an evening apparition) this usually happens about a week or so before the elongation date. During the rest of June, look for very subtle shadings in the cloudy crescent of Venus as it noticeably thins and lengthens. Venus is also beginning to decline in the twilight, so skywatchers at 40 degrees north latitude saw the planet shining about 25 degrees above the western horizon an hour after sunset on June 1, but by June 30 Venus will only be 15 degrees above the horizon an hour after sunset and will set less than 30 minutes after the end of twilight. These are all signs that Venus is swinging toward us along its orbit, on its way to passing between the Earth and sun in August.

June 12 and 13: Use binoculars or a wide-field telescope these evenings to enjoy the fine sight of Venus on the north edge of the sparkling Beehive star cluster.

June 14: Mars in conjunction with the sun and is invisible this month. In fact, we'll have to wait until late in August to see Mars again as the Red Planet emerges from the glare of the rising sun as a morning object.

June 19: This evening, take note of the 3 1/2-day old crescent moon hovering well below the planets Venus and Jupiter in the west-northwest sky.

Jupiter is still prominent in the west in the June twilight; next to Venus it's the second brightest evening "star." Throughout June, Jupiter will be closing in on Venus from the upper left. Telescope users will do best to observe Jupiter early in the month and early in twilight. Even though Jupiter is on the far side of the Sun and about as small as it ever appears, in a telescope it still shows the largest disk of any planet (although by month's end Venus will appear just a trifle smaller). In the first half of June this giant planet is still at least 30 degrees high (three fist-widths at arm's length above horizontal) as seen from mid-northern latitudes 45 minutes after sundown. Look for Regulus, only about a twentieth as bright, to Jupiter's upper left. Jupiter, in Cancer, is trekking slowly eastward against the stars toward Regulus; it reaches the Cancer-Leo border on June 9.  [Best Constellations in June's Sky Explained (Video)]

June 24: After passing through inferior conjunction on May 30, Mercury reaches its greatest elongation from the sun in the dawn sky. This is not a very high apparition of Mercury for mid-northern latitudes, but you can try catching it low in the east-northeast about an hour to 45 minutes before sunrise during the second half of this month. Also this morning, Mercury appears 2 degrees above and to the left of the orange star Aldebaran. This pair of 1st-magnitude objects might be spied with binoculars very low near the east-northeast horizon except perhaps from far-northern states, where they might simply be too low to pick out against the brightening dawn.

June 28: Saturn and the moon pair off for a second, closer meeting this month. This evening Saturn will sit a couple of degrees to the moon's lower right.

June 30: Venus and Jupiter make their closest approach to each other this evening, forming a stunning "double planet," Jupiter appearing above Venus and separated by just over 0.3 degrees. Jupiter shines at magnitude -1.8 and yet as brilliant as it is, it's still only 1/11th as bright as Venus.