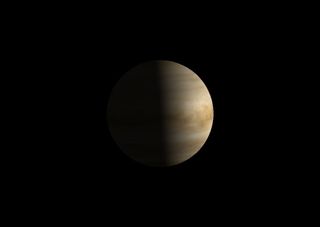 Venus is now a bright “evening star” setting just after the Sunday It is at greatest eastern elongation on Nov. 1, looking like a miniature first quarter moon.
(Image: © Starry Night Software)

The brilliant planet Venus is now a beautiful evening "star" in the late-fall twilight, shining brightly in the southwest through the purple dusk. But did you know Venus has phases like the moon that are visible in telescopes?

Weather permitting, Venus is the first planet night sky observers can spot, and it is even visible before sunset if you know just where to look in the southwest sky. The planet is gaining altitude in the twilight, boldly showing itself off after six months of hiding behind any inconvenient obstructions near the southwestern horizon.

Venus is brightening too, since it is speeding toward Earth as it catches up to us in its faster, inner orbit around the sun. [Weirdest Facts About Venus]

As Venus travels around the sun inside the Earth's orbit, it alternates regularly from evening to morning sky and back. It typically spends about 9 1/2 months as an "evening star" and about the same length of time as a "morning star."

Some ancient astronomers actually thought they were seeing two different celestial bodies. They named the morning star after Phosphorus, the harbinger of light, and the evening star for Hesperus, the son of Atlas. It was the Greek philosopher and mathematician Pythagoras who first realized that Phosphorus and Hesperus was one and the same object.

To the ancients, such behavior was puzzling and was not really understood until the time of the famed 17th century astronomy Galileo Galilee. After moving to Pisa in the autumn of 1610, Galileo started observing Venus through his crude telescope. One evening he noticed that a small slice seemed to be missing from Venus' disk.

After several more months, Venus appeared in the shape of a crescent — in other words, it seemed to display the same behavior as the phases of the moon. This was a major discovery, which ultimately helped to deliver a deathblow to the long-held concept of an Earth-centered universe.

Venus' path around the sun

Venus wanders only a limited distance east or west of the sun, since, like Mercury, it is an "inferior" planet (orbiting the sun more closely than Earth does). Watching its movement is akin to watching an auto race from the grandstand: All the action takes place in front of you and it’s necessary to turn only a limited amount either way to see it at all. In contrast, for "superior" planets (those located in orbits beyond the Earth from the sun), viewers on Earth are like the pit crews inside the racetrack who must turn in all directions to follow the cars.

When Venus is on the opposite side of the sun from the Earth, it appears full (or nearly so) and rather small because it is far away. But because Venus moves with a greater velocity around the sun than the Earth, it gradually gets closer and looms progressively larger in apparent size. The angle of sunlight striking it as seen from our Earthly vantage point also appears to change as well.

Ultimately, as Venus prepares to pass between the Earth and the sun it appears as a thinning crescent.  And since at this point in its orbit it is nearly six times closer to us compared to when it was on the opposite side of the Sun, it appears much larger to us as well.

Here then, is a schedule of how Venus’ appearance has — and will — change during the coming weeks and months:

2013 Nov. 1, Greatest Eastern Elongation: Venus passed that point in the sky where it attained its greatest angular distance (47º) from the Sun last Friday and now sets about 2 1/2 hours after sundown. In our solar system geometry, Venus made a right angle with both the sun and Earth. In terms of apparent size, Venus now appears more than twice as large as it was at the end of July.

In a small telescope, Venus now closely resembles a dazzling silvery-white "half-moon." In the nights that follow it gradually becomes a fat crescent while growing ever larger as it swings around in its orbit closer to Earth.

2013 Nov. 6: Venus and the crescent Moon will make for an eye-catching sight in the west-southwest sky right after sunset. Venus will shine well below and to the left of the slender sunlit sliver (13-percent illuminated) of the moon. Observers should also be able to see the full globe of the moon, its darkened portion glowing with a bluish-gray hue interposed between the sunlit crescent and not much darker sky.

This vision is sometimes called "the old moon in the young moon's arms." Leonardo da Vinci (1452-1519) was the first to recognize it as earthshine. That dim bluish-gray light is light from the Earth reflected back to the moon.

The Earth's light of course is reflected sunlight, so earthshine is really sunlight which is reflected off Earth to the moon and reflected back to Earth. Another, similar pairing-off between the Moon and Venus will take place on the evening of Dec. 5.

2013 Dec. 6, Greatest Illuminated Extent/Greatest Brilliancy: This is the "compromise phase" between the time that Venus appears full, but tiny and when it appears almost six times larger but is just a hairline crescent. The greatest amount of illuminated surface area combined with a moderately large angular size makes Venus now appear truly dazzling, shining 25 times brighter than Sirius, the brightest star and setting nearly three hours after the sun.

Venus appears so bright now that it can be seen easily with the naked eye in a deep blue, haze-free afternoon sky. It continues to approach the Earth while appearing to curve back in toward the Sun in our sky. In a telescope it is now a big, beautiful crescent that grows larger and thinner with each passing night.

The crescent can now be glimpsed even in steadily held binoculars. Venus now stands 37 million miles from the Earth. Its disk appears 25-percent illuminated and about 35 percent larger in size than it did just one month ago.

2013 Dec. 21, Disk 12-percent illuminated: The crescent of Venus continues to narrow, but because it also continues to approach our Earth, it appears to greatly lengthen as well. It's now 29 million miles away, but is also now in a rapid plunge down the sky toward the sun. It's now setting just over two hours after sunset.

This is a good time to compare the appearance of Venus' two cusps. Can you make out the crescent's "cusp extensions" — the thread-like wisps of light extending beyond the crescent's points?

2013 Dec. 28, Disk only 6-percent illuminated: It is now critical to try and locate Venus as early as possible when it is still high in the sky in a steady atmosphere. Observing well before sunset is best. At sunset as seen from mid-northern latitudes, Venus stands about 15 degrees above the southwest horizon and sets about 100 minutes later. Note: Your fist at arm's length covers 10 degrees of sky.

By this time, Venus is less than 27 million miles from the Earth and is becoming more and more aligned between our planet and the sun. As such, Venus is turning more and more of its dark side toward us. A week from now, it will be all but gone from the evening sky.

2014 Jan. 11, Inferior Conjunction: Venus will finally transition from an evening to morning star and will appear to pass between the Earth and the sun on this day. By the morning of Jan. 17 Venus is emerging as a new morning “star” rising in the east-southeast at mid-dawn.

By this time, Venus can be found about 3 degrees above the horizon a half-hour before sunrise.  A line from the star Deneb, in Cygnus through the star Altair, in Aquila points right at it. After another week you should see it easily from anywhere with an open east-southeastern view 45 minutes to an hour before sunrise.

Editor's note: If you have an amazing night sky photo of Venus that you would like to share for a possible story or image gallery, please contact managing editor Tariq Malik at spacephotos@space.com.

Joe Rao serves as an instructor and guest lecturer at New York's Hayden Planetarium. He writes about astronomy for Natural History magazine, the Farmer's Almanac and other publications, and he is also an on-camera meteorologist for News 12 Westchester, N.Y. Follow us @SPACEdotcom, Facebook or Google+. Originally published on SPACE.com.