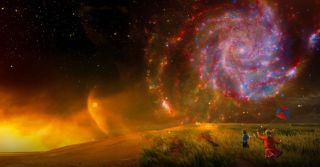 A new NASA initiative will help lead the search for signs of life beyond our solar system.

The Nexus for Exoplanet System Science, or NExSS, will take a multidisciplinary approach to the hunt for alien life, bringing together experts in Earth science, planetary science, heliophysics and astrophysics to get a better understanding of life might emerge and develop around distant stars, NASA officials said.

"This interdisciplinary endeavor connects top research teams and provides a synthesized approach in the search for planets with the greatest potential for signs of life," Jim Green, director of NASA's Planetary Science Division, said in a statement. "The hunt for exoplanets is not only a priority for astronomers, it's of keen interest to planetary and climate scientists as well." [10 Exoplanets That Could Host Alien Life]

NExSS will be led cooperatively by three researchers: Natalie Batalha of NASA's Ames Research Center in Moffett Field, California; Dawn Gelino of the NASA Exoplanet Science Institute at the California Institute of Technology in Pasadena; and Anthony del Genio of NASA's Goddard Institute for Space Studies in New York City.

Batalha is mission scientist for NASA's planet-hunting Kepler spacecraft, which has discovered more than 1,000 alien worlds since its launch in March 2009, along with more than 3,000 other "candidate planets," the vast majority of which should eventually be confirmed.

"NExSS scientists will not only apply a systems science approach to existing exoplanet data, their work will provide a foundation for interpreting observations of exoplanets from future exoplanet missions such as TESS, JWST, and WFIRST," Paul Hertz, director of the Astrophysics Division at NASA Headquarters, said in the same statement.

"TESS" stands for the Transiting Exoplanet Survey Satellite, which NASA aims to launch in 2017 to look for nearby alien worlds. "JWST" is the James Webb Space Telescope, the $8.8 billion successor to NASA's iconic Hubble Space Telescope, which is scheduled the lift off in 2018. The Wide-Field Infrared Survey Telescope (WFIRST) is a potential space telescope mission that could launch in the mid-2020s to study dark energy, hunt for exoplanets and perform other tasks.