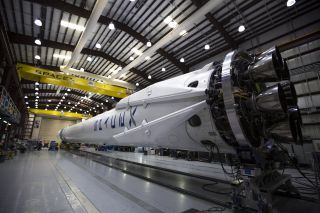 SpaceX will try again to make history during the launch of its robotic Dragon cargo capsule to the International Space Station on Monday (April 13).

The company aims to bring the first stage of its Falcon 9 rocket back to Earth for a soft touchdown on an unmanned "spaceport drone ship" in the Atlantic Ocean after the booster sends Dragon on its way toward the orbiting lab. Liftoff is scheduled for 4:33 p.m. EDT (2033 GMT) Monday from Florida's Cape Canaveral Air Force Station; you can watch all the action live here at Space.com, courtesy of NASA TV.

SpaceX attempted the same reusable-rocket maneuver during the last Dragon cargo launch, which occurred in January, and very nearly pulled it off: The Falcon 9 first stage succeeded in hitting the drone ship but came in a bit too hard and exploded on the deck. [SpaceX's Reusable Rocket Landing Test Explained (Infographic)]

The rocket stage's stabilizing "hypersonic grid fins" ran out of hydraulic fluid, SpaceX founder and CEO Elon Musk said after the Jan. 10 try. He vowed to fix that particular issue in time for the next attempt.

The next booster to come down for a drone-ship landing will have "way more hydraulic fluid," Musk tweeted on Jan. 16. "At least it shd explode for a diff reason."

The autonomous drone ship, incidentally, is named "Just Read the Instructions," after a sentient colony vessel from the sci-fi novels of Iain M. Banks.

Monday's test is part of SpaceX's effort to develop fully and rapidly reusable rockets. Such technology could slash the cost of spaceflight by a factor of 100, helping open the heavens to exploration, Musk has said.

The main mission on Monday, however, is to get Dragon and the 4,387 lbs. (2,015 kilograms) of food, supplies and scientific experiments that it's toting on course to the space station. The launch will initiate the sixth of 12 cargo missions that SpaceX is flying to the orbiting lab under a $1.6 billion NASA contract.

If all goes according to plan, Dragon will arrive at the station on Wednesday (April 15). The spacecraft will spend about five weeks attached to the $100 billion complex before coming back down to Earth with 3,020 lbs. (1,370 kg) of science gear, hardware and trash.

The capsule will splash down in the Pacific Ocean, then be retrieved by recovery crews via boat. (Dragon is the only cargo vessel flying today capable of bringing supplies back to Earth; the others are all designed to burn up in Earth's atmosphere.)