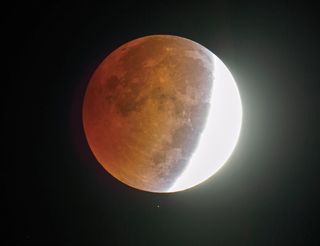 A total lunar eclipse will rise on April 4, 2015, but totality will only last for a very short amount of time.
(Image: © Sky & Telescope/Johnny Horne)

Early-rising observers all over the United States should be able to see at least the partial phases of the April 4 lunar eclipse just before the sun rises, if weather permits. People on the West Coast will have the chance to see the moon turn an eerie shade of red during totality, which should begin at about 7:58 a.m. EDT (1158 GMT, 4:58 a.m. PDT).  NASA this week unveiled a video detailing the total lunar eclipse, and dubbed the event the shortest lunar eclipse of the century in an announcement on Monday (March 30) in detail.

Observers in other parts of the world will have an even better chance to see the lunar eclipse. Stargazers in Australia, Japan, China, and Southeast Asia will get the chance to see the eclipse on the night of April 4, according to Sky & Telescope. (Sky & Telescope predicts that the total phase of the eclipse will actually last about 9 to 12 minutes starting at 7:54 a.m. EDT.) [Must-See: Best Skywatching Events of 2015 (Infographic)]

"Total lunar eclipses, like the one we're looking forward to on 4 April, are a slow, ethereal affair and, as usual, we'll have cameras around the world bringing us live views," Will Gater, an astronomer at the online Slooh Community Observatory said in a statement. "What better way to start the day than tuning in to watch this wonderful event."

Slooh will host a live webcast of the total lunar eclipse on the Slooh.com website on Saturday starting at 6 a.m. EDT (1000 GMT) on April 4. The webcast will be available on Space.com, courtesy of Slooh.

This lunar eclipse will be the third of four eclipses in a lunar eclipse tetrad. The first occurred in April 2014, with the second rising in September 2014. The final lunar eclipse in the tetrad will happen on Sept. 28, according to NASA.

"During the eclipse, the moon often looks reddish because sunlight has passed through Earth's atmosphere, which filters out most of its blue light," NASA officials said in a statement. "This eerie, harmless effect has earned the tongue-in-cheek nickname 'blood moon.'"

Unlike total solar eclipses, lunar eclipses can be seen by anyone on Earth that can see the moon at the time of the eclipse, Sky & Telescope added. Total Solar eclipses — like the one that happened only a couple weeks ago, on March 20 — can usually only be seen by a small swath of the planet because of the way the moon, sun and Earth align.

If you have any questions about the eclipse, you can ask a NASA astronomer via Twitter on Saturday using the hashtag #eclipse2015 starting at 6 a.m. EDT and lasting through the end of the eclipse at about 8 a.m. EDT (1200 GMT).

Editor's Note: If you snap an amazing picture of the lunar eclipse Saturday or any other night sky view that you'd like to share for a possible story or image gallery, send photos, comments, and your name and location to managing editor Tariq Malik at spacephotos@space.com.