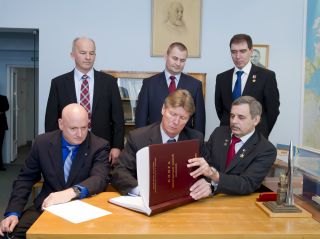 Preparing to go to space for a year is no walk in the park. But with two years of training behind them, NASA astronaut Scott Kelly and cosmonaut Mikhail Kornienko did, in fact, visit a park. They spent their last couple of weeks on Earth participating in traditions dating back to the very first human to leave the planet.

Kelly and Kornienko, together with cosmonaut Gennady Padalka, are set to launch to the International Space Station on Friday (March 27) from Kazakhstan's Baikonur Cosmodrome in Central Asia. After a four-orbit, six-hour flight, they will take up residency on board the outpost, with Kelly and Kornienko beginning the space station's first yearlong mission. (Padalka will stay in space for the more typical six months.) You can watch live coverage of the yearlong mission today on Space.com.

Although their mission will mark a first, their path to launch included a traditional set of events steeped in Russian spaceflight history. [See photos of the one-year space mission]

Here is a list of some of the customs the two spacefarers have and are still to participate in:

On March 6, prior to departing the training center at Star City, located just outside of Moscow, Kelly, Kornienko and Padalka visited the office of the first person to fly in space, the late Yuri Gagarin, which has been preserved as part of the center's cosmonaut memorial museum. There, they sat at Gagarin's desk and, following tradition, signed a guest book that has been autographed by the crews that have preceded them to space.

On the same day, the three crewmates also visited Red Square in Moscow, where they laid red carnations at the Kremlin Wall where Gagarin and other Russian space icons are interred.

"It is a great tradition that the Russians have coming here and honoring the cosmonauts and other folks that worked in the space program," Kelly told a NASA interviewer. "It is really great to be a part of this."

After flying from Moscow to Baikonur on March 14, the trio took part in a traditional flag-raising ceremony, symbolizing the official start to the final stage of their prelaunch preparations. Kelly, together with his backup, NASA astronaut Jeffrey Williams, raised the American flag, while Kornienko and Padalka hoisted the Russian colors. The cosmonauts' backups, Alexei Ovchinin and Sergei Volkov, raised the flag of Kazakhstan.

A practical forest now stands in Baikonur, where 50 years ago one did not. This is thanks to a tradition dating back to Gagarin's launch. Each crewmember plants a tree in a grove located along the Avenue of the Cosmonauts. Gagarin's tree now stands tall, whereas the trees planted for Kelly, Kornienko and Padalka on March 21 were just saplings.

Keys to the craft

On March 23, the three took "ownership" of their spacecraft, Soyuz TMA-16M, during a customary handover ceremony between the crew and the team at Rocket and Space Corporation (RSC) Energia, the company that builds the capsules and boosters. The same event included an opportunity for Kelly, Kornienko and Padalka to climb into the Soyuz and check out their ride to orbit.

The Soyuz-FG rocket, topped with theTMA-16M spacecraft, was rolled out by train from its assembly facility to the launch pad on March 25. The event drew a crowd of onlookers, but Kelly, Kornienko and Padalka were nowhere to be seen. Russian tradition dictates it is bad luck for the space-bound crew to watch their rocket reach the pad.

What better way to mark your last night on Earth than by watching a movie? On March 26, the crew gathered to watch the tradition-dictated "White Sun of the Desert." The 1970 popular action-comedy by Russian filmmaker Vladimir Motyl follows a soldier during the Russian Civil War. The soldier wants to return home to his wife but instead must guard a harem of the rebel leader.

On launch day, as they leave to get into their spacesuits, Kelly, Kornienko and Padalka will autograph the door of their crew quarters. They will also toast their flight with a glass of champagne and, if desired, be blessed and doused with holy water by a Russian Orthodox priest.

As legend has it, Yuri Gagarin paused on the way out to the launch pad to relieve himself one last time, and so began a final tradition. The bus taking Kelly, Kornienko and Padalka out to "Gagarin's Start" will stop on the way just long enough for the three to take a leak on the left back wheel of their transport.

Robert Z. Pearlman is a Space.com contributing writer and the editor of collectSPACE.com, a Space.com partner site and the leading space-history-focused news publication. Follow collectSPACE.com on Facebook and on Twitter at @collectSPACE. Follow us @Spacedotcom, Facebook or Google+. Originally published on Space.com.