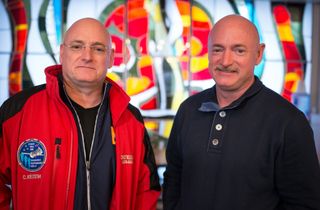 Scott Kelly, left, and his identical twin brother Mark pose for a photo at the Cosmonaut Hotel in Baikonur, Kazakhstan on March 26, 2015, one day before Scott was scheduled to launch on a one-year mission to the International Space Station.
(Image: © NASA/Bill Ingalls)

NASA's Kelly astronaut twins met up for a photo Thursday (March 26), just a day before one of them was scheduled to launch toward the International Space Station on an epic and unprecedented yearlong mission.

The photo, taken by NASA photographer Bill Ingalls, shows Scott Kelly (on the left) and his identical twin brother Mark at the Cosmonaut Hotel in Baikonur, Kazakhstan. Scott Kelly is slated to launch from Baikonur Cosmodrome along with two Russian spaceflyers, Mikhail Kornienko and Gennady Padalka, today (March 27) at 3:42 p.m. EDT (1942 GMT). You can watch the liftoff live here on Space.com, courtesy of NASA TV.

Padalka will stay aboard the orbiting lab for the typical six-month stint, but Kelly and Kornienko will become the first people ever to live and work on the International Space Station for a continuous year (though several cosmonauts did stay at least that long aboard the old Soviet/Russian space station, Mir).

The one-year mission should help doctors, scientists and mission planners better understand the physical and psychological effects of long-duration spaceflight, NASA officials have said. Such information should help inform the quest to send astronauts to Mars.

Mark Kelly isn't blasting off today, but he's an important part of the one-year mission as well. Doctors will monitor Mark's vital signs over the next 12 months, providing a sort of control that should help researchers better understand what happens to Scott's body during his time in space.

The 51-year-old Kelly twins are both experienced astronauts. Scott was pilot on the space shuttle Discovery's STS-103 mission in 1999, which serviced NASA's Hubble Space Telescope, and commanded the shuttle Endeavour's STS-118 flight to the space station in 2007. He also stayed aboard the orbiting lab for five months in 2010-2011, serving as commander of the station's Expedition 26.

Mark Kelly, who is married to former Arizona congresswoman Gabrielle Giffords, has flown on four space shuttle missions, one each in 2001, 2006, 2008 and 2011. He served as commander on the latter two flights.

Mark Kelly retired from NASA in 2011, citing a desire to spend more time with his family and to help Giffords recover from the injuries she suffered during a January 2011 assassination attempt.