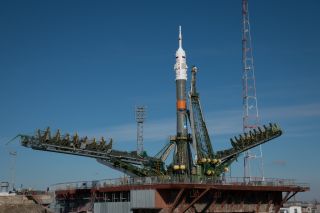 A three-person crew will blast off to the International Space Station today (March 27), and two of them won't be coming back to Earth for a full year. You can watch live online as the yearlong mission begins.

NASA astronaut Scott Kelly and cosmonauts Mikhail Kornienko and Gennady Padalka will fly to the station atop a Russian Soyuz spacecraft from Kazakhstan's Baikonur Cosmodrome in Central Asia. Kelly and Kornienko will participate in the yearlong mission aboard the orbiting outpost, while Padalka spends six months on the station before flying home. Watch the one-year space crew launch live on Space.com starting at 2:30 p.m. EDT (1830 GMT) via NASA TV. The three crewmembers are scheduled to blast off at 3:42 p.m. EDT (in the wee hours of Saturday morning, Baikonur time).

Kornienko and Kelly's one-year mission will help scientists on the ground gather much-needed data about how the human body behaves during a long-term spaceflight. It will take much more than a year for astronauts to get to Mars, a major NASA goal going forward, so learning more about how the body reacts to a long spaceflight is necessary before people can fly to the Red Planet safely. [One-Year Space Station Mission: Full Coverage]

"This knowledge is critical as NASA looks toward human journeys deeper into the solar system, including to and from Mars, which could last 500 days or longer," NASA officials said in a statement. "It also carries potential benefits for humans here on Earth, from helping patients recover from long periods of bed rest to improving monitoring for people whose bodies are unable to fight infections."

Scientists know a lot about how bodies change after six months in microgravity (the usual amount of time a crewmember spends on the International Space Station), but this yearlong mission could help researchers understand other ways astronauts change after more time in orbit. For example, officials will monitor Kelly and Kornienko's mental health, eyes, muscle and bone mass to determine what kind of ill effects the long-duration stay in space might have on them.

Kelly's yearlong mission will mark the first time an American has spent a continuous year in orbit. Some Soviet-era cosmonauts spent a year (or more) in space during the 1980s and 1990s on the space station Mir, but this mission will be the first time the United States and Russia have collaborated for a yearlong spaceflight.

And it will break a lot of records.

Padalka's approximately six-month-mission on the station will make him the record-holder for most total time spent in space by any human, according to NASA. Kelly's yearlong mission will put him over the top as the NASA astronaut with the most cumulative spaceflight time under his belt at 522 days total.

Kornienko, Kelly and Padalka will be greeted on the space station by three other crewmembers already on board. NASA's Terry Virts, European Space Agency astronaut Samantha Cristoforetti, and Russia's Anton Shkaplerov are already living and working on the station ahead of the one-year mission.