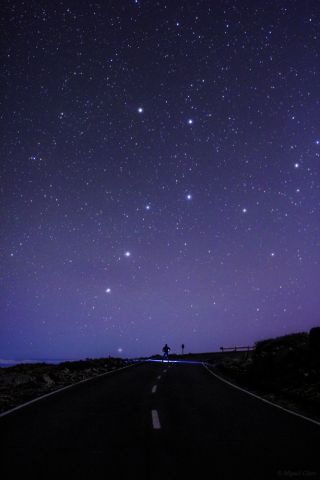 The spring sky will be full of bright stars, among them the constellation Ursa Major, also known as the Big Dipper. Miguel Claro took this photo of the Dipper on the road to Roque de Los Muchachos on the island of La Palma in the Canary Islands, September 2013. He used a Canon 60Da camera (ISO2500; 24mm at f/2; Exp. 15 seconds) to capture the image.
(Image: © Miguel Claro | www.miguelclaro.com)

With spring officially underway in the Northern Hemisphere, the evening sky is transitioning to the stars and constellations that will adorn the heavens for the next few months. So, if you are a fan of Orion and its retinue, get your looks in fast, because those stars will be all but gone by the end of April.

Part of the reason these constellations will be disappearing can be traced to the Earth's rotation. Contrary to popular belief, our planet does not turn on its axis once in 24 hours. Rather, the time it takes for one full rotation comes out to 23 hours and 56 minutes. If we follow the movement of the stars across the sky, we would see that the times of their rising and setting occurs 4 minutes earlier compared to the previous night; astronomers call this a sidereal day. So compared to tonight, after a week a particular star will be setting nearly 30 minutes earlier and a month from now, that star will be setting some 2 hours earlier compared to now.

Another factor that hastens the disappearance of the winter stars is the fact that the days are rapidly lengthening by nearly 3 minutes per day. So the sun is setting about a minute later, while the stars are setting 4 minutes earlier: A combination that, ultimately, will drive most of the stars that dominated our frosty nights into invisibility in a matter of a weeks. [101 Amazing Photos by Stargazers]

Step outside tonight around 9 o'clock local time and Orion will still be visible about halfway up in the southwest sky. But by the end of April, Orion will be in that position at 7 p.m. local time. The only problem is, the sun will still be up and it will be daytime. In fact, it will not get fully dark by the end of April until around 9:30 p.m. At that time, Orion will be almost completely gone. Perhaps you might catch a glimpse of Betelgeuse, the bright red star in Orion's shoulder hovering just above the western horizon earlier in the evening in the twilight sky, but other than that, the mighty hunter will be all but gone.

At this time of year, no fewer than 10 first-magnitude stars are in the evening sky at once. No other season, even winter, can offer so many.

Probably the most famous star pattern are the seven stars that compose the familiar Big Dipper, now high in the north and nearly overhead during the evening. The two outer stars of the bowl point to the North Star (Polaris). The middle star of the handle (Mizar) is a double star. A fainter companion star (Alcor) is visible if you have good eyesight.

Following the curve of the Big Dipper's handle will take you to a brilliant orange star, Arcturus, one of the few stars mentioned in the Bible. Arcturus is in the constellation of Bootes, the Herdsman, a long, kite-shaped figure extending close to the Dipper's handle.

Of the zodiacal constellations — those in which are traversed by the moon and planets — one of the best known is Leo, the Lion, which stands high above the southern horizon as darkness falls. Pretend that the bowl of the Dipper has a hole in it; the water streaming out of the bowl would fall directly on Leo. A backward question-mark-pattern of stars, known as the Sickle, forms the Lion's head and mane, while a triangle of stars to the left of the Sickle forms the Lion's hindquarters.

Another zodiacal constellation, situated to the lower left of Leo, is Virgo, the Young Maiden. Her brightest star is Spica, a blue-white first-magnitude star that is 250 light-years away. If you follow the curve of the Dipper's handle through Arcturus, you can find Spica, or as some people say, you can "speed to Spica." [Types of Telescopes - Which is Right for You?]

If you start your stargazing right after sundown, you'll almost certainly notice dazzling Venus glowing in the western sky. Venus is becoming increasingly spectacular in the evening sky. Look for it blazing in the west during and after twilight. Setting an average of 2 minutes later each night, this dazzling world (magnitude -4.1) is now venturing into seldom-seen territory: the late night sky. We are usually accustomed to having Venus set much earlier in the evening, but by the end of April, Venus will be setting within a half hour of midnight. On April 11, take note of Venus passing a couple of degrees to the lower left of the famous Pleiades star cluster in Taurus.

Meanwhile, nearly two-thirds of a way up from the south-southwest horizon as darkness falls you'll find Jupiter. The "king of the planets" is rivaled only by the moon and Venus and continues to be a grand sight for both naked-eye and telescopic observers to behold.

And finally, during the last week of April, about 45 minutes after sunset, look low toward the west-northwest horizon and you'll see a brilliant "star" shining with an ochre hue. That will be Mercury, which at magnitude -1.2 is nearly a match for Sirius, the brightest star. On April 30, Mercury passes within a degree to the lower left of the Pleiades; half the distance of Venus 19 days ago. Look low to the west-northwest horizon about an hour after sunset. Binoculars will help you pick up the Pleiades against the twilight sky.