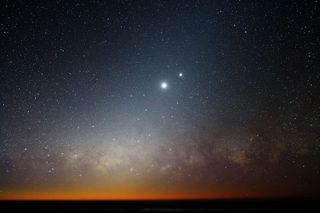 The Moon and Venus shine in the skies of Cerro Paranal, home of ESO’s Very Large Telescope (VLT). Below them, the Milky Way glows crimson.
(Image: © ESO/Y. Beletsky)

Have you ever wondered why most star patterns are associated with specific seasons of the year? Just why, for instance, can evening skywatchers in the Northern Hemisphere enjoy Orion the Hunter only during the cold wintry months?

During balmy summer evenings it is not Orion, but the stars of Scorpius, the Scorpion, that dominate the southern sky. Spring evenings provide us with a view of the Sickle of Leo, the Lion. But come fall evenings, it’s the Great Square of Pegasus that vies for the stargazer’s attention.

The change is subtle, to say the least.

Were we to watch the sky on any night from dusk to dawn we would notice certain stars rising from above the eastern horizon in the evening hours. They would sweep across the sky during the night, finally setting beneath the western horizon by dawn. No big deal here, since, after all, the sun does the same thing during the daylight hours.

But with the passage of time, we would notice something rather puzzling.

Those stars that were low over the western horizon during the early evening hours would, within a matter of a few weeks, disappear entirely from our view, their places taken up by groups that a few weeks earlier were previously higher in the sky at sundown. In fact, it would seem that with the passage of time, all the stars gradually shift westward while new stars move up from the eastern horizon to take their place.

But just why is this shift happening?

As our Earth whirls through space around the sun, its motions cause night and day, the four seasons and the passage of the years. If we were to synchronize our clocks using the motions of the stars as a reference, we would discover that the Earth completes a single turn on its axis not in 24 hours, but actually four minutes shy of that oft-quoted figure: 23 hours 56 minutes.

As a result, the stars appear to rise, cross the sky, and set four minutes earlier each night. This amounts to a whole hour earlier in 15 days and two hours earlier in 30 days.

A little quick arithmetic shows that with a difference of two hours per month, that in one year the cycle will come full circle (12 months times two hours equals 24 hours), since each star completes a full circle around the sky during the course of one year.

This can be made clearer by trying an experiment. Suppose you look skyward tonight and pick out a bright star, then line it up with a nearby landmark (like a telephone pole or the peak of your neighbor’s roof).

Make sure you note the exact time and the exact spot when you lined up the star. Then come back the next night at the exact same time and stand in the exact same place. You’ll see that the star has apparently shifted slightly to the right (west) of the position that it was at the previous night.

Had you arrived four minutes earlier, the star would have lined up exactly with the nearby landmark just as you had seen the previous night.

This apparent westward drift of the stars, incidentally, is a motion that is in addition to the daily rising, circling and setting, because the Earth does not simply stand in the same spot in space and spins, but is constantly rushing eastward along in its orbit around the sun.

It carries us steadily toward and under the stars to the east and away from the stars that we are leaving in the west, until we make a complete circle around the sun, bringing us back to our original position in one year.

And then … the whole performance starts again.

At this point you might be a bit confused.  If the Earth takes 23 hours 56 minutes to turn on its axis, why do we say that a day is 24-hours long?

Astronomers have devised special clocks adjusted to keep time solely by the stars. These astronomical clocks keep "sidereal" (star) time. There is no a.m. or p.m. in a sidereal day.

The hours start at 00 hour (zero hour) and are numbered straight through to 23 hours and then starts at the zero hour again. The other difference is that the sidereal clock runs four minutes fast as compared with a regular clock.

We’re accustomed, of course, to be awake when it’s light and asleep when it’s dark, so astronomers also developed a "mean" sun, which governs our ordinary clocks and results in 24-hour (solar) time of which we are all accustomed to.

The mean sun, however, is fictitious and for most of the year deviates somewhat from the true sun’s position in the sky. It was invented only to make 24-hour timekeeping by the sun mathematically correct.

So the next time you go outside at night and can't find a star you thought was supposed to be there, keep in mind that you're not standing still. The Earth is always in motion, whizzing through space and circling the sun, and can make checking your watch a real headache when you contemplate it all.