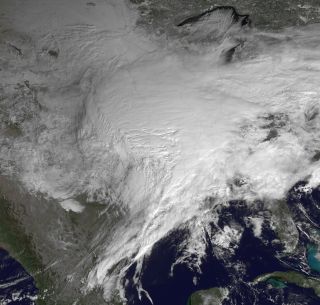 The massive winter storm that is roaring across the U.S.
(Image: © NOAA)

As most weather-minded people know, today is Groundhog Day. According to folklore, if it is cloudy when a groundhog emerges from its burrow on this day, it will leave the burrow, signifying that winter will soon end in the Northern Hemisphere.

If, on the other hand, it is sunny, the groundhog will supposedly "see its shadow" and retreat back into its burrow, and winter will continue for six more weeks. Today is also Candlemas, once regarded as the first of the four "cross-quarter" days of the year, or the middle of the winter season, halfway between the December solstice and the March equinox.

But in actuality, winter’s midpoint will occur tomorrow (Feb. 3) at 6:28 a.m. EST (1128 GMT). Although the altitude of the sun has been slowly climbing and the length of daylight has been increasing since the winter solstice on Dec. 21, any changes up to this point have been relatively subtle.

For example: On the first day of winter at New York City, sunset occurred at 4:32 p.m. EST (2132 GMT) and the length of daylight (from sunrise to sunset) reached a minimum of 9 hours and 15 minutes.

Tomorrow — winter’s midpoint in the Northern Hemisphere — the sun will set at 5:16 p.m. EST (2217 GMT) with only 57 additional minutes of daylight having accumulated since Dec. 21.

But as an old and true New England proverb notes: "As the days lengthen, the cold strengthens."

And as most people who live in the United States, southern Canada and much of Europe will attest this particular winter season, the thermometer appears to be reluctant to respond to the increasing solar altitude. Indeed, the nearly extra hour of daylight is not enough to give us any sense of warmth. While the days have gradually become longer, the bitterness of winter with its attendant ice and snow is still the same.

Still, it’s in the second half of winter that the effects of the northward shift of the sun’s direct rays start becoming much more noticeable.

In fact, by March 20 — the date of the vernal equinox — the length of daylight will have increased by almost two full hours since Feb. 3.  Because daylight saving time now begins on the second Sunday in March, by March 20 the sun will be setting after seven in the evening (7:08 p.m.).

Interestingly, for many northern locales, long-term records indicate the first four days of February are the coldest of the winter.

But average daily temperatures rise rapidly thereafter, so that by the last week of the month they are higher than any day in January.

So for all those winter-weary souls, take heart: in the days and weeks to come, you’ll more readily be able to sense the greater amounts of daily light and see the more northerly position of the afternoon sunsets on the horizon.

And soon the weather will correspondingly respond as well.

So, tomorrow marks the halfway point of winter and we’re about to turn the corner, so to speak, both astronomically and meteorologically. And no matter what your local groundhog might say today, spring is well on its way.