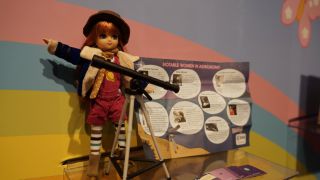 The new Stargazer Lottie doll, set to be released this month, was designed in collaboration with the European Space Agency and a working astrophysicist. She has her own telescope, solar system trading cards and profiles of famous female astronomers.
(Image: © Tariq Malik/Space.com)

Young skywatchers and outer space enthusiasts should be on the lookout this month for the release of a new toy designed in collaboration with the European Space Agency and a working astrophysicist, that's bringing real astronomy to playtime.

The Stargazer Lottie doll, set to be released later this month, looks like many other dolls designed for children under 10: She comes with clothing and miniature accessories that fit her astronomy theme. But the Stargazer Lottie doll stands out from the crowd because she incorporates real science: Lottie's accessories include a realistic telescope, solar system collector cards and a sheet of paper featuring profiles of famous female astronomers.

"With stargazer Lottie, we've really tried to make astronomy accessible, fun and educational for kids of a very young age — really from about 3 up to about 7 or 8," said Lucy Follett, co-founder of Lottie dolls and creative director at Arklu Ltd., the company that produces the dolls. [Best New Space Toys at 2015 Toy Fair]

A stop-motion-animation video created by the Lottie designers shows the new Lottie dolls in action, along with other members of the Lottie doll family: Super Lottie and Fossil Hunter Lottie.

For the Stargazer doll, the designers gained technical guidance from Karen Masters, a senior lecturer in astronomy at the University of Portsmouth in the United Kingdom, "to ensure that the astronomy details on [the] packaging were correct," Follett told Space.com in an email. The Special Edition "Gold Collection" Stargazer Lottie doll is being released in collaboration with the European Space Agency.

The telescope that comes with Stargazer Lottie is based on the Galileoscope, a low-cost telescope that can be assembled without adhesives or tools, with the goal of supporting science education worldwide, according to the project website. Follett said the company has also created expanded biographies of the women astronomers who appear on the paper sheet that comes with the doll.

With this impressive astronomy résumé, the Stargazer Lottie doll won the Little Scientists category in Space.com's 2015 Space Age Awards, which are given out to new toys presented at the annual Toy Fair in New York City.

"Lottie doesn't wear makeup, high heels or jewelry, and she can stand on her own two feet … a life skill that is important for girls both big and small," the company said in a statement.

"Abby's mother, Zoe, approached us and told us that Abby suggested we create an astronomy-themed 'Stargazer' Lottie doll and included some guidance in terms of ideas for the packaging and clothing," Follett wrote.

Zoe told the Lottie designers, "For Stargazer Lottie's box, Abby thinks there should be a telescope, constellations like Andromeda and Ursa Major. She would also like the Earth to appear as it does from space, a meteor shower, the moon and Venus. Abby really hopes that the doll has some stars on her clothing!"

This isn't the first time the company has incorporated real science into the Lottie dolls: Robot Girl Lottie, who comes with her own customizable robot, features a biography of female robotics engineer Erin Kennedy and information about Kathy Ceceri, author of "Robotics," an introductory book to designing robots.

The new Special Edition "Gold Collection" Fossil Hunter Lottie doll is a collaboration with TrowelBlazers, a group of women archaeologists, paleontologists and geologists. The doll also includes a set of special collector cards about the British female fossil hunter Mary Anning, to "teach and inspire children to learn about her life and achievements," according to a statement from Arklo. Just as Stargazer Lottie features a list of notable women astronomers, Fossil Hunter Lottie also comes with a sheet featuring notable women in paleontology.