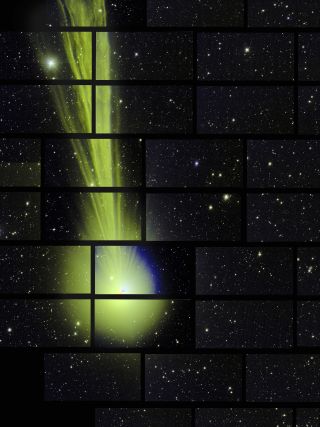 The world's most powerful digital camera caught an amazing glimpse of Comet Lovejoy when it passed in front of the sensitive field of view.

The "accidental observation" of Comet Lovejoy on Dec. 27 shows the comet's nucleus and coma splayed across several frames the camera took. At the time, Lovejoy was 51 million miles (82 million kilometers) from Earth. Ordinarily, the Dark Energy Camera looks at far more distant objects; it can image things up to eight billion miles (12.8 billion kilometers) away.

"Our favorite [memory] all was the accidental observation of Comet Lovejoy," wrote the blog Dark Energy Detectives (a blog of the Dark Energy Survey) of the sighting. "It reminds us that before we can look out beyond our galaxy to the far reaches of the universe, we need to watch out for celestial objects that are much closer to home."

The image was captured while astronomers were scanning the southern sky for the five-year Dark Energy Survey, which aims to learn more about dark energy, the mysterious force that is accelerating the universe's expansion.

The camera is 570 megapixels and is designed to look for lights from galaxies and stars far away from Earth. Its field of view is about 2.2 degrees, equivalent to an area of sky 20 times the size of the moon seen from Earth.

Lovejoy appears to glow green in telescope views of amateur astronomers, who have captured numerous images and video of the comet since its discovery.