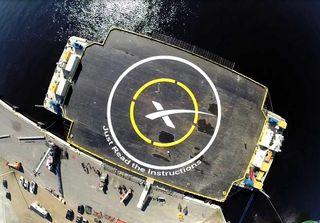 SpaceX's autonomous spaceport drone ship, named "Just Read the Instructions," is designed to be an offshore landing pad for the company's Falcon 9 rocket. SpaceX aims to land the Falcon 9's first stage on the ship during the DSCOVR satellite launch on Feb. 10, 2015.
(Image: © SpaceX via Elon Musk, Twitter)

SpaceX will have its hands full on Tuesday (Feb. 10) as the company tries to get one payload into space and bring two vehicles safely down to Earth a continent apart, all within the span of a few hours.

SpaceX's Falcon 9 rocket is scheduled to launch the DSCOVR space-weather satellite from Florida's Cape Canaveral Air Force Station at 6:05 p.m. EST (2305 GMT) Tuesday evening. The Falcon 9's first stage will then attempt to land on an unmanned drone ship in the Atlantic Ocean, in a key test of reusable-rocket technology. You can watch the SpaceX launch and splashdown live on Space.com, courtesy of NASA TV.

Meanwhile, SpaceX's robotic Dragon cargo capsule is slated to come back to Earth Tuesday as well, wrapping up a monthlong mission to the International Space Station. Splashdown will happen off the coast of Baja California in the late afternoon local time, after which SpaceX personnel will retrieve Dragon by boat. [The DSCOVR Mission in Pictures]

"Tuesday will be a busy day, but SpaceX has planned and prepared for this scenario," SpaceX representatives told Space.com via email. "We have separate operations and recovery teams on both coasts, so we are equipped to handle both events simultaneously."

Developing fully and rapidly reusable rockets is a priority for SpaceX. The company has tried the drone-ship landing once before, during the Jan. 10 launch of Dragon toward the space station. On that day, the Falcon 9 first stage succeeding in hitting the autonomous ship, but it came down too hard and exploded.

Fins used to help steer and stabilize the rocket stage ran out of hydraulic fluid during the attempt, SpaceX's billionaire founder and CEO Elon Musk has said. Engineers have taken steps to make sure that this doesn't happen again, but success Tuesday is far from assured.

"Rocket re-entry will be much tougher this time around due to [it being a] deep-space mission," Musk said via Twitter Sunday (Feb. 8). "Almost 2X force and 4X heat. Plenty of hydraulic fluid tho."

DSCOVR — a joint effort of the National Oceanic and Atmospheric Administration, NASA and the Air Force — is designed to give researchers a heads-up about potentially disruptive solar storms coming Earth's way. DSCOVR was originally envisioned as an Earth-observation mission called Triana. It was announced in 1998 (and championed by then-Vice President Al Gore), canceled in 2001 and brought back in 2009, with a space-weather focus.

SpaceX did not originally intend for Tuesday to be so busy. The DSCOVR launch was scheduled for Sunday (Feb. 8), but weather concerns and a glitch with the Air Force's radar tracking system delayed the liftoff by two days.

Dragon is finishing up its fifth official cargo run to the space station for NASA. SpaceX holds a $1.6 billion contract with the space agency to make 12 such flights using Dragon and the Falcon 9. The company is also developing a crewed version of Dragon under a separate NASA contract.