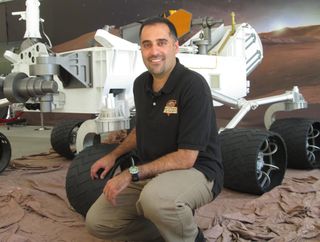 PASADENA, Calif. — Ashwin Vasavada knows he has some pretty big shoes to fill.

Vasavada is the newly appointed project scientist for NASA's Mars rover Curiosity, in charge of a team of nearly 500 researchers spread around the globe. He succeeds John Grotzinger, who steered Curiosity to some big finds over the past few years — including the discovery that Mars could have supported microbial life in the ancient past.

"It's a big step to lead this large team; there's nobody else anymore. The buck stops with me," Vasavada told Space.com with a wry chuckle. "The pace of success and scientific achievement have been so great that it makes one a bit nervous about keeping it up!" [Curiosity's Biggest Discoveries (So Far)]

The car-size Curiosity rover landed on Mars in August 2012 under Grotzinger's leadership. Vasavada — who's based at NASA's Jet Propulsion Laboratory (JPL) here in Pasadena — was a deputy project scientist until now.

In that role, Vasavada had focused on science operations. He has worked on Curiosity's $2.5 billion mission — formally known as the Mars Science Laboratory (MSL) — for more than a decade and knows the rover and its subsystems like few others.

"I had focused very strongly on operations in the last few years. Making sure that everything operated smoothly took up the bulk of my time," he said. "You have to 'feed' the rover every day, and it's an incredibly complex process, analyzing the data and working with the engineers to maximize the science returns. There are a hundred questions every day and potential problems to keep in check. "

Generally speaking, the project scientist facilitates the work of Curiosity's nine principal investigators (PIs). Each PI is attached to an instrument onboard the rover. [A 'Curiosity' Quiz: How Well Do You Know NASA's Newest Mars Rover?]

"John had been doing a lot of the data-analysis side, keeping track of all the different things that people were working on and prompting them to pursue different lines of research," said Vasavada, who has a Ph.D. from the California Institute of Technology (Caltech). "He made sure that collaboration was occurring and managed interactions between team members. I'll be doing a lot more of that now."

When asked about his own scientific pursuits on the mission, Vasavada noted that he had co-authored a number of papers with the MSL team, but that science operations management really took most of his time in the deputy's role.

"I look forward to diving in to the scientific side more," he said. "I may not be doing a lot of my own science, but can now take a smaller role in 50 different research projects. It's all incredibly exciting."

MSL is a huge project, more similar in leadership design to outer-planet orbiter missions such as the $3.2 billion Cassini-Huygens mission to Saturn than to previous Mars rover efforts. NASA's last rover mission, which dropped the Spirit and Opportunity rovers on the Red Planet in January 2004, had a sole PI: Steve Squyres of Cornell University.

"That said, a rover mission like this is more like an expedition than an orbiter mission is. Every day you need to decide if you will be heading for this hill or that one, and where you might want to stop," Vasavada said.  "On orbiter missions, you can divide up the pie in advance and interact less in the heat of the moment, if you will. During a particular Cassini orbit of Saturn, for example, this instrument gets three hours, this one gets two, and so on. Then people can go off and do their own thing. On a rover mission, all the instruments are carried in one machine, and everyone must agree on whether we turn right or left, do we investigate this rock or that one. It requires a lot more real-time coordination."

As Space.com readers know, Curiosity has faced some challenges while crossing the floor of Gale Crater toward the huge Mount Sharp, its ultimate science destination. For example, the rover's wheels absorbed significantly more damage than mission team members had expected during the long trek to the 3.4-mile-high (5.5 kilometers) mountain's base, which ended in September.

I asked Vasavada about Curiosity's well-being as the extended mission began.

"Our arrival at Mount Sharp coincided with our having largely resolved the wheel-damage issue," he said. "I've been handed a healthy rover, we are where we want to be and there is just so much to do."

Are any other mechanical or electronic issues on the watch list as Curiosity begins its exploration of Mount Sharp?

"Barring things that are hard to predict, like something breaking or wearing out, no," Vasavada said. "We do know that the RTG [radioisotope thermoelectric generator] power source will degrade over time. For the next two to four years, we will be able to operate with generally the same pace of operations and same energy budget that we have become used to. But after that, we will start to have limited discretionary energy, and will need to spread some activities that we might do in a single day now across a number of days. That's a limitation of this rover as opposed to something like MER that uses solar panels.

"It creates additional time pressure, so we are pushing hard," he added. "We want to take full advantage of the high power budget we have now."

As Curiosity moves up through the foothills of Mount Sharp, it encounters new opportunities. One new factor is the ability to combine data from the CRISM (Compact Reconnaissance Imaging Spectrometer for Mars) instrument on NASA's Mars Reconnaissance Orbiter (MRO) with "ground truth" observations from Curiosity. This data partnering occurred recently during Curiosity's survey of an outcrop called Pahrump Hills. [Latest Mars Photos from MRO]

"The sample from the first hole we drilled at Mount Sharp turned out to be a different composition than we had seen thus far in the mission, and something that we could tie to the CRISM observations from MRO," Vasavada said. "Up to that point, most of the terrain that we had covered was too dusty for CRISM to get a detection from orbit, but with the rocks at Mount Sharp we could. So we can now conduct joint investigations with the orbiters."

Vasavada and the rest of the science team want Curiosity to drive up through Mount Sharp's foothills, reading the rocks there for clues to how the Red Planet's climate and environmental conditions shifted over time.

"We can see the bedrock exposed on the valley walls. So even as we drive we can study the stratigraphy of the rocks," Vasavada said. "Hopefully this will be as fruitful as it has been in the past, where we saw the deltas and fluvial environment as we headed towards Mount Sharp," which has made the role of water in local formations increasingly clear.

In December, mission scientists announced that Curiosity's SAM (Sample Analysis at Mars) instrument had detected organic chemicals — the carbon-containing building blocks of life as we know it — on Mars, as well as a mysterious spike in atmospheric methane.

The methane surge is intriguing, because the gas can be an indicator of biological activity (although mission team members stressed that methane is produced by geological processes as well). [The Search for Life on Mars in Photos]

Vasavada said that Curiosity would continue to test for methane occasionally, but would sample more frequently when the Martian season matched previous methane spikes.

"We also need to conserve the resources within SAM, which are finite, so we can't sniff for methane every day," he added.

Grotzinger is leaving the top science job on MSL to take over as the chairman of Caltech's Division of Geological and Planetary Sciences, but he is not off the case entirely.

"I'm staying on as a science team member, on both the SAM and CheMin [Chemistry and Mineralogy instrument] teams, as well as strategic planning," Grotzinger said in an exclusive interview with Space.com, "and I am looking forward to rolling up my sleeves and getting more involved in the science data analysis."

While Grotzinger said he was ready to turn over the helm to Vasavada, he will miss aspects of the mission.

"It sounds trite, but it is the experience of a lifetime, to be able to do something that is at such a cutting edge regarding the technologies, and be able to explore the ancient rock records of another planet," he said. "I'll miss the challenges of leading the mission. It was fun."

Grotzinger added, "Ashwin is a great choice. He has such an in-depth understanding of the rover, and is extremely experienced with operations and the strategies we have been employing in operating the mission. And as an atmospheric scientist, Ashwin brings a lot of experience to bear on how to interpret the geological, geochemical and other data that we get, and being able to reconstruct past climates."

If Vasavada has any hesitation, it might be about the commitment the new job requires. "This will be an even more intense time for me. We're a dedicated bunch at JPL," he said with a laugh. "John, [deputy project scientist] Joy Crisp and myself were often the last three lights on in the building."

Moving ahead, his lights may be burning a bit longer.

"My new responsibilities are much more personal involving the relationships with the nine principal investigators, making sure that they are getting the best results from their science, and are getting what they need from each other. I'll also work to resolve any conflicts. That's a huge investment in terms of both time and emotions."

He paused, and added: "But what an opportunity… not just once-in-a lifetime experience, but one that many people never even get. It's going to be an incredible few years, and worth whatever it takes."