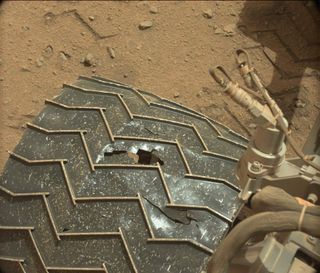 If there were mechanics on Mars, NASA may have taken the Curiosity rover into the shop by now.

The 1-ton robot has accumulated quite a bit of wheel damage since touching down inside Gale Crater in August 2012 to investigate Mars' past and present potential to host microbial life.

"They are taking damage. That's the surprise we got back at the end of last year," said Jim Erickson, Curiosity project manager at NASA's Jet Propulsion Laboratory (JPL) in Pasadena, California. "We always expected we would get some holes in the wheels as we drove. It's just the magnitude of what we're seeing that was the surprise." [Amazing Mars Rover Curiosity's Martian Views (Latest Photos)]

But the damage has not imperiled the rover's mission, said Curiosity's handlers, who are employing a number of troubleshooting measures to keep the robot rolling along. They're confident Curiosity can still reach and explore its ultimate science destination: the foothills of the 3.4-mile-high (5.5 kilometers) Mount Sharp.

Each of Curiosity's six aluminum wheels is independently actuated and geared, built for climbing in soft sand and rolling over rocks. However, engineers eyeing rover-snapped imagery have been taken aback by the amount of wear and tear on the wheels.

This damage comes in several forms. For example, there are punctures in the wheel skin between what are called "grousers" — traction bars that take on the form of a zigzag pattern on the wheels. Grousers help improve wheel performance and provide a better grip on the Martian terrain, rover team members said.

"We are getting punctures through there. After a while, those punctures can begin getting cracks from the puncture in different directions," Erickson told Space.com. The entire skin between two grousers could get punched out if there are enough cracks on both sides, he added.

The damage isn't identical from wheel to wheel. The two front wheels have worn differently than the two middle wheels, Erickson said.

It turns out that the tough-as-nails culprit playing havoc with Curiosity's wheels is "caprock," which is quite resistant to weathering and erosion.

"To the extent possible, we're trying to avoid that particular kind of rock," Erickson said. "Overall, we're learning how to pick our poison … how to get to the right paths that are going to minimize — I repeat, minimize, not eliminate — the damage we're going to get to the wheels. We have never encountered this kind of hard, embedded rock on Mars before."

Lessons learned from the Curiosity wheel anxiety are expected to influence the design of NASA's next Mars rover, which is scheduled to launch in 2020. [NASA's 2020 Mars Rover (Images)]

This process has motivated the rover team to get better acquainted with the Martian landscape.

"Since we first recognized that wheel damage had occurred more rapidly than expected, we have learned to read the terrain," said John Grotzinger, Curiosity project scientist at the California Institute of Technology in Pasadena.

Grotzinger told Space.com that wheel damage is not simply related to driving distance. Rather, it relates more to terrain type.

"The last few months have seen us pull together as scientists and engineers to understand how to avoid the 'briar patches' formed of broken-up fragments of hard sandstone, and drive in the valleys made of softer rock and sometimes partially filled with sand," Grotzinger said.

Moreover, Mars rover teams have conducted tests in JPL's "Mars Yard," which show that driving Curiosity backward produces dynamic forces that are lower in magnitude, "sort of like pulling your roll-aboard baggage over a curb rather than pushing it," Grotzinger said.

"All in all, we're confident we can avoid the most damaging terrain, taking a somewhat longer route to Mount Sharp that has us driving in more sand," Grotzinger added. "We'll still have rough spots that we must drive across because there is no way around them, but for the next few months we'll be driving in and out of shallow valleys cut through the hard caprock sandstone that are filled with windblown sand."

Wheel punctures, cracks and the prospect of "grouser snapping" are being closely monitored. But as the rover chalks up more mileage, one other

concern is that a wheel could split apart. If that happens, the wheel might flop back and forth. And with every turn, it could hit exposed cables that go from the rover through the axel to the motor.

"That's sort of a worst-case expectation" that could lead to Curiosity having to drag the damaged wheel, Erickson said. "We can't risk having shorts in those cables."

While the wheel woes are very real, teams back on Earth are engaged in a large test program, Erickson said.

"We even had more wheels built to the exact same specifications as Curiosity wheels. The preliminary results back are promising," he said, adding that the assessments indicate that the rover can keep on trucking for many more miles.

Furthermore, rover engineers have other tricks up their sleeves.

In addition to picking less troublesome trails, engineers can upload software upgrades that enable greater control over the wheels. Driving backward can also help, as can minimizing turns.

"We're sort of building a tool box. We'll pull out the right tools at the right time," Erickson said.

Leonard David has been reporting on the space industry for more than five decades. He is former director of research for the National Commission on Space and is co-author of Buzz Aldrin's 2013 book "Mission to Mars – My Vision for Space Exploration" published by National Geographic. Follow us @Spacedotcom, Facebook or Google+. Originally published on Space.com.