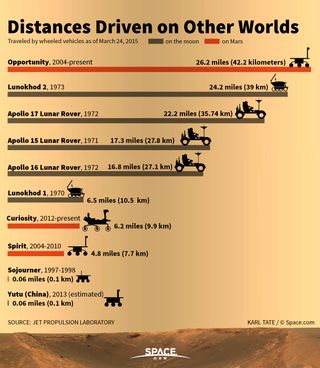 Graph of the distances driven by robots, rovers and automobiles on other planets.
(Image: © Karl Tate, SPACE.com)

If you thought driving on Earth is a chore, you haven't tried off-roading on another planet. So far, robotic rovers have reached out to the moon and Mars, with astronauts actually driving a lunar car on the moon during NASA's Apollo program. Those missions amount to what could be the first interplanetary road race. See how the endurance drives on other worlds stack up in the SPACE.com infographic above.

Leading the pack is NASA's Mars rover Opportunity, which has been driving across the plains of Meridiani Planum on the Red Planet since 2004. Opportunity has driven more than 24.07 miles (38.73 km) and is still going today.

In second place with silver is the Soviet-era Lunakhod 2. This huge moon rover drove 23 miles (37 kilometers) on the moon during its 1973 mission and is currently the world champion for off-world driving, winning the gold medal.

The bronze medal for space driving goes to NASA's Apollo 17 moon rover, which was driven by astronauts Gene Cernan and Harrison Schmitt in 1972. The astronauts drove 22.3 miles (35.89 km) during their mission, which was the last moon landing of NASA's Apollo program.

The latest to enter the race is Mars Science Laboratory Curiosity, which is just getting started with 3.0 miles (4.8 km) traveled so far.