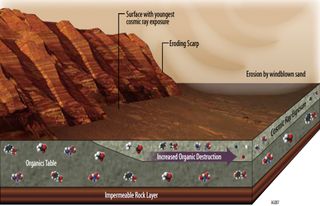 NASA's Curiosity rover has recently made a surprising find on Mars that could help scientists get one step closer to figuring out if the Red Planet has ever supported life.

The 1-ton Curiosity rover also discovered a fleeting spike in the levels of methane at its landing site, Gale Crater. Over the course of four measurements in two months on Mars, average methane levels increased 10 fold before quickly dissipating, but the cause of the fluctuation is still unknown.

Researchers are particularly interested in finding methane on alien worlds because living organisms produce an overwhelming amount of the gas on Earth. While finding significant amounts of methane on Mars isn't a sure-fire sign of past or present life — geological processes can also produce the gas — it's still a good starting point, according to many scientists. [The Search for Life on Mars in Photos]

"Right now, it's too much of a single-point measurement for us really to jump to any conclusions," Paul Mahaffy of NASA's Goddard Space Flight Center in Greenbelt, Maryland one of the authors of the new methane study, told Space.com. "So all we can really do is lay out the possibilities. And we certainly should have an open mind. Maybe there are microbes on Mars cranking out methane, but we sure can't say that ​with any certainty. It's just speculation at this point."​

The new study, which was published online today (Dec. 16) in the journal Science, also reveals that Curiosity found methane levels in the Martian atmosphere to be, on average, about 0.7 parts per billion.

This level is lower than previous estimates and calculations, but still higher than earlier Curiosity readings of methane published last year. The rover's earlier measurements did not find any trace of methane in the Martian atmosphere; however, scientists found a way to concentrate the rover's samples of the atmosphere, allowing them to get the most recent data about the gas.

The lack of methane measured earlier by Curiosity was disappointing for many scientists because of its potentially damning implication for finding Martian life. But the new measurements could mean there's hope yet.

"The original Science [journal] paper was very negative about there being any credence to large fluctuations in methane," Jan-Peter Muller, an ExoMars and Curiosity team member that isn't directly involved with the new study, told Space.com. "The current paper shows that such conclusions should be taken with a great deal of skepticism until sufficient data has been collected."

Water and spikes in methane

Another study published in Science today also details another exciting Curiosity find on Mars. Using a sample of clay, scientists have measured the hydrogen in the Martian atmosphere about 3 billion to 3.7 billion years ago. The new finding could help pin down when the Red Planet lost its liquid surface water.

NASA officials also announced during a news conference at the meeting of the American Geophysical Union today that Curiosity has measured organic compounds in a rock the rover drilled into on the Martian surface. The molecules could have been delivered to Mars via meteorites, or they could be native to the Red Planet, officials added.

"We will keep working on the puzzles these findings present," John Grotzinger, Curiosity project scientist of the California Institute of Technology in Pasadena, said in a statement. "Can we learn more about the active chemistry causing such fluctuations in the amount of methane in the atmosphere? Can we choose rock targets where identifiable organics have been preserved?"

The momentary spike in the level of methane found in the Martian atmosphere is somewhat puzzling for the scientists who discovered it. Curiosity found that the background level of methane averages out to about 0.7 parts per billion, but the spike brought those levels up to an average of 7 parts per billion, in just 60 Mars days. This is particularly surprising because scientists expect methane on Mars to have a lifetime of about 300 years, much longer than it actually stuck around near Curiosity, according to Christopher Webster, the lead author of the new study. [7 Biggest Mars Mysteries Ever]

It's possible that a trapped bit of gas set free somewhere near Curiosity caused the increase in methane, scientists speculate. This burp could have created a momentary rise in the methane level around the rover, an increase that dissipated relatively quickly.

"Because of the way it [the methane] behaves, we believe it's a smaller, closer source [rather] than it is a bigger, further away source," Webster told Space.com. "But as far as the source of that methane, we cannot rule out biological activity, whether it's today or in the past, and we cannot rule out geophysical activity."

Scientists have seen fluctuations in the level of methane in the Martian atmosphere before, using orbiters and Earth-based means of looking at the planet, said Malynda Chizek Frouard, a Mars methane researcher at New Mexico State University who is unaffiliated with the study. The new data from Curiosity could help create better models of the Martian atmosphere, Chizek Frouard added.

Researchers can now try to "create scenarios where a burst of methane would produce the same sort of variation that they saw in Gale Crater," Chizek Frouard told Space.com.

Webster and his team say it is possible to narrow down the source of the methane further, but Curiosity probably isn't up to the task. Scientists will need new tools at Mars that can probe the planet's thin atmosphere to see what type of methane is present.

Certain isotopes of the gas could indicate that life forms created the methane at some point in Mars' history, while other isotopes would potentially mean that geological forces are responsible for producing the gas.

"This is a big surprise to us," Webster said. "And here we are, writing the next chapter."