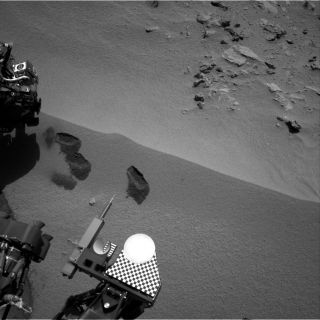 Three bite marks left in the Martian ground by the scoop on the robotic arm of NASA's Mars rover Curiosity are visible in this image taken by the rover's right Navigation Camera during the mission's 69th Martian day, or sol (Oct. 15, 2012). The third scoopful, collected on that sol, left the bite or pit farthest to the right. Each of the three bites is about 2 inches (5 centimeters) wide.
(Image: © NASA/JPL-Caltech)

NASA's Mars rover Curiosity has delivered the first Martian dirt sample to its onboard chemistry laboratory, testing out gear that forms the scientific heart of the $2.5 billion robot.

Curiosity's huge robotic arm dropped a pinch of Red Planet dirt into the rover's Sample Analysis at Mars instrument, or SAM. SAM can detect organic compounds — the carbon-containing building blocks of life as we know it — and is thus key to Curiosity's mission, which seeks to determine if Mars has ever been capable of supporting microbial life.

"We received good data from this first solid sample," SAM principal investigator Paul Mahaffy, of NASA's Goddard Space Flight Center in Greenbelt, Md., said in a statement. "We have a lot of data analysis to do, and we are planning to get additional samples of Rocknest material to add confidence about what we learn."

While last Friday's activities kicked off SAM's soil analyses, the instrument had already sniffed the Martian air several times in a search for methane, a gas commonly produced by living organisms here on Earth. The first few sniffs revealed no methane, scientists announced earlier this month, adding that Curiosity will keep hunting for the gas.

SAM and the Chemistry & Mineralogy instrument, or CheMin, both sit inside Curiosity's body and are designed to analyze soil samples delivered by the rover's 7.1-foot-long (2.1 meters) robotic arm. CheMin has already studied Martian soil and received a fresh sample from the same scoop that fed SAM, scientists said.