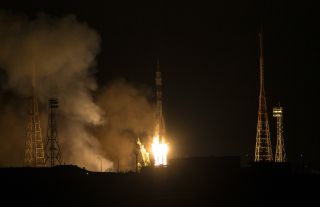 Virts, Cristoforetti and Shkaplerov's Soyuz spacecraft linked up with the space station at 9:48 p.m. EST (0248 GMT).[See photos from the current space station crew]

Virts is planning on sharing his experiences in space via social media websites like Twitter. The NASA astronaut is planning to take photos of his views of the planet to help people experience a little bit of what spaceflight is like.

"It's such a unique experience and such a small number of people ever get to leave Earth, so I'm going to be using Twitter and Instagram to share pictures," Virts told Space.com before launch. "@AstroTerry is the call-sign [Twitter handle]. And hopefully I can just share the adventure that I'm going on with as many people as possible around the world."

While Soyuz spacecraft are the only crewed vehicles that fly to the space station now, there are other crafts that visit the orbiting outpost on a regular basis. Private spaceflight companies SpaceX and Orbital Sciences fly robotic cargo missions to the station, while Russia's Progress vehicles also deliver supplies to the station. Japan's robotic H-2 Transfer Vehicles also fly equipment to the laboratory, and the European Space Agency's own Automated Transfer Vehicle fleet launching its fifth and last cargo mission to the station earlier this year.

Once they arrive at the station, the three crewmembers will join NASA's Barry Wilmore and cosmonauts Alexander Samokutyaev and Elena Serova as part of the Expedition 42 crew. Construction of the $100 billion International Space Station began in 1998. The laboratory in space has been staffed by rotating crews of astronauts and cosmonauts since 2000.