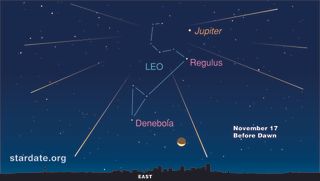 Meteors appear to come out of the constellation Leo during the Leonid meteor shower, which is expected to peak on Monday.
(Image: © StarDate Magazine)

Stargazers hoping to catch a glimpse of some meteors should look to the predawn sky early next week.

The Leonid meteor shower is forecasted to peak Monday afternoon (Nov. 17) in the U.S. eastern time zone, so stargazers in the United States are advised to look to the skies between midnight and dawn on Monday and Tuesday morning for the best view, astronomers say.

But the Leonids have a lot to live up to: In peak years, this meteor shower — which occurs every November — has produced meteors at a rate of 1,000 or more per hour. A year like that is unlikely to happen again for the Leonids until around 2034.

To have the best chance of spotting meteors, you should go to a location away from city lights, dress warmly, lie flat on your back and look straight up, Cooke said in a statement. No special viewing equipment is needed to see the Leonid shower; it can be seen with the naked eye.

The "shooting stars" from the Leonid meteor shower appear to come out of the constellation Leo, which will climb into view in the northern hemisphere after midnight. The meteors are bits of dust and rock from the tail of Comet Tempel-Tuttle, which does a loop around the sun every 33 years. Every November, Earth passes through the debris field left behind by Tempel-Tuttle, and the bits of debris "ram into the atmosphere at tens of thousands of miles an hour," according to StarDate magazine. The dust and rocks burn up in the atmosphere, creating the gorgeous light show seen on Earth.

If skywatchers don't feel like going out in the cold, both NASA's Meteorite Environment Office and the Slooh Community Observatory will broadcast the shower live.

NASA's live stream will include a sky view from a telescope at Marshall Space Flight Center in Alabama. That stream will begin on Monday, Nov. 17 at 7:30 p.m. EST (0030 GMT Tuesday) and will continue until sunrise on Tuesday Nov. 18.

You can watch the Leonid meteor shower webcasts on Space.com, courtesy of Slooh and NASA.

Cooke noted that some astronomers have predicted that a second peak of this year's Leonid meteor shower will occur Thursday, Nov. 20. If those predictions are correct, skywatchers will see meteors created by debris left behind by Comet Tempel-Tuttle in 1567.

As the comet rounds the Earth, its debris field is stretched out by the gravity of Jupiter, Cooke said. Occasionally, the pull of gravity stretches portions of the debris into filaments, and this year, there's a chance Earth will pass through a filament of debris that is almost 450 years old.

Editor's note: If you snap an amazing photo of the Leonid meteor shower of November 2014, or any other night sky view, and you would like to share it for a possible story or image gallery, send your images and a description of the view and equipment in to managing editor Tariq Malik at spacephotos@space.com.