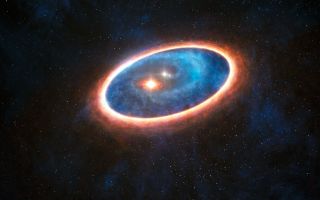 A planet may be forming in a star system with more than one sun, making it sort of like an early Tatooine, the fictional home world of Luke Skywalker in "Star Wars," new research shows.

The finding could help explain how planets orbiting multiple stars are born and, in turn, one day reveal many new potential locations of alien worlds, scientists say.

Although Earth orbits a single star, nearly half of sunlike stars are in binary systems, which are made up of two stars orbiting each other as a pair. In fact, there are many three-star systems, and even some that are home to up to seven stars. Worlds that orbit binary stars, like the fictional planet Tatooine from "Star Wars," are known as circumbinary planets. The first real-life alien world found around two suns is Kepler-16b, a gas giant orbiting the star Kepler-16 about 200 light-years from Earth. [The Strangest Alien Planets (Gallery)]

A planet with extra suns

In another scenario for binary stars, planets can orbit one star but not the other. These alien planets are known either as circumprimary planets or circumsecondary planets, depending on which star they orbit in the binary system — the brighter or more massive star, referred to as the primary star, or the fainter or less massive one, called the secondary star. For instance, Alpha Centauri Bb is a rocky planet orbiting Alpha Centauri B, the dimmer of the Alpha Centauri AB binary system, about 4.2 light-years from Earth.

Planets are born from masses of gas and dust whirling around stars. Planet formation is a slow process; one of these protoplanetary discs must exist for a long time before a planet can form. Scientists had thought the powerful gravitational pull that binary stars would exert on these discs might disrupt the material within too much for it to easily coalesce into worlds. This made the existence of real-life planets in binary systems a bit of a mystery.

"Many detections of exoplanets around binary stars have been reported during the last decade, but forming planets in such dynamically active environment is thought to be more difficult than around single stars like our sun," said study co-author Emmanuel Di Folco, an astronomer at the University of Bordeaux in France.

To help solve the mystery of how planets in binary systems are born, astronomers investigated the multiple-star system GG Tau-A, which is only 1 million to 5 million years old. The system is located about 450 light-years from Earth, in the constellation Taurus the Bull.

Scientists observed the gas and dust in GG Tau-A using the Atacama Large Millimeter/submillimeter Array (ALMA) in the Atacama Desert in northern Chile. Like a wheel inside another wheel, GG Tau-A contains a large, outer disc encircling the entire system, as well as an inner disc around its primary star, GG Tau-Aa. The inner circumprimary disc has a mass about the same as Jupiter's, while the outer circumbinary disc has a mass about 157 times that of Jupiter.

The smaller, inner disc has been a mystery for astronomers because it is losing matter to its central star at a rate that should have depleted it long ago. Now, scientists have found large, massive clumps of gas rich in carbon monoxide in the region between the two discs, which suggests that material is flowing from the outer disc to the inner disc, creating a sustaining lifeline between the two. [10 Exoplanets That Could Host Alien Life]

In addition, "we also suspect, from our high-resolution observations, that a young giant exoplanet might be forming at the outer edge of the bright ring of dust and gas, at about 250 astronomical units from the stars," Di Folco told Space.com.

Prior computer simulations had suggested that it was possible for material to stream from a massive outer disc into the inner reaches of a binary system, but this is the first time scientists have actually seen this happening.

"We need to investigate whether the suspected young protoplanet can create a detectable gap in the outer disc, which would be an ultimate evidence of its real nature," Di Folco said. "Our research on this particular object will benefit from the development of the ALMA array that has recently received its final antenna on the [Llano de] Chajnantor [Observatory] site in Chile."

About 50 percent of sunlike binary stars, and 80 percent of binary stars less massive than the sun, are in tight binary systems, where the member stars are separated by 50 AU or less. "The stars in GG Tau-A have a separation of about 40 AU — this system is thus emblematic of tight binaries," Di Folco said. "The process that was unveiled in our observations might thus be quite common and crucial for short-separation binaries."

The scientists detailed their findings in the Oct. 30 issue of the journal Nature.