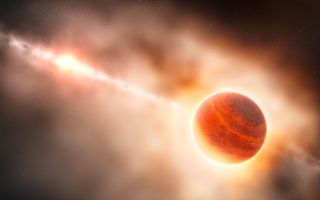 This artist’s impression shows the formation of a gas giant planet in the ring of dust around the young star HD 100546. This system is also suspected to contain another large planet orbiting closer to the star. Image released Feb. 28, 2013.
(Image: © ESO/L. Calçada)

Astronomers have captured what may be the first-ever direct photograph of an alien planet in the process of forming around a nearby star.

The picture, which captured a giant alien planet as it is coming together, was snapped by the European Southern Observatory's Very Large Telescope in Chile. It shows a faint blob embedded in a thick disk of gas and dust around the young star HD 100546. The object appears to be a baby gas giant planet, similar to Jupiter, forming from the disk's material, scientists say.

"So far, planet formation has mostly been a topic tackled by computer simulations," astronomer Sascha Quanz of ETH Zurich in Switzerland, leader of the research team, said in a statement. "If our discovery is indeed a forming planet, then for the first time scientists will be able to study the planet formation process and the interaction of a forming planet and its natal environment empirically at a very early stage."

The star HD 100546, which lies 335 light-years from Earth, was already thought to host another giant planet that orbits it about six times farther out than the Earth is from the sun. The new potential planet lies even farther, about 10 times the distance of its sibling, at roughly 70 times the stretch between the Earth and sun. [Giant Planet In the Making Spotted? (Video)]

The possible planet seems to fit the picture scientists are building of how worlds form. Stars themselves are born in clouds of gas and dust, and after the form, a disk of leftover material often orbits them. From this disk, baby planets can take shape. That's what appears to be happening here.

For example, the new photo reveals structures in the disk surrounding the star that could be caused by interactions between its material and the forming planet. Furthermore, the data suggest the material around the planet-blob has been heated up, which is consistent with the planet-forming hypothesis.

The observations were made possible by the NACO adaptive optics instrument on the Very Large Telescope, which compensates for the blurring caused by Earth's atmosphere. The instrument also uses a special coronagraph that observes in near-infrared wavelengths to block out the bright light from the star, so as to see its surroundings better.

"Exoplanet research is one of the most exciting new frontiers in astronomy, and direct imaging of planets is still a new field, greatly benefiting from recent improvements in instruments and data analysis methods," said Adam Amara, another member of the team. "In this research we used data analysis techniques developed for cosmological research, showing that cross-fertilization of ideas between fields can lead to extraordinary progress."

The findings are detailed in a paper to appear online in today's (Feb. 28) issue of Astrophysical Journal Letters.