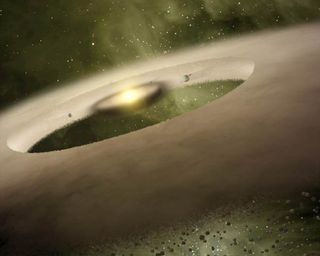 An artist's rendition of the 1-million-year-old star system UX Tau A, located approximately 450 light-years away. Observations from NASA's Sptizer Space Telescope showed a gap in the dusty disk swirling around the system's central star. Astronomers suspect that the formation of one or multiple planets carved the space in this disk.
(Image: © NASA)

Astronomers have detected dust grains glomming together around a faraway star, capturing a snapshot of what appear to be newly forming alien planets caught in the act of being born.

Scientists used the Subaru Telescope in Hawaii to image the disk of dust and gas surrounding UX Tauri A, a young star found about 450 light-years from Earth in the constellation Taurus (The Bull). Analysis of the image revealed large and non-spherical dust particles — a telltale sign that grains are adhering to each other in a process that will eventually lead to planet formation, researchers said.

UX Tauri A is a sun-like star about 1 million years old, and it's part of a binary star system. Back in 2007, NASA's Spitzer Space Telescope discovered a gap in the protoplanetary disk surrounding UX Tauri A, suggesting that one or more planets may be taking shape there.

This gap is huge, extending from 0.2 to 56 astronomical units from UX Tauri A (1 astronomical unit is the distance from Earth to the sun, or about 93 million miles). If this gap were transported to our solar system, it would range from Mercury to Pluto, researchers have said.

The new results suggest that planets are indeed forming around UX Tauri A, despite the star's youth.

The team looked closely at UX Tauri A in near-infrared wavelengths, measuring how the disk's dust particles scatter and reflect light. They determined that the particles are about 30 microns wide — 300 times bigger than the motes floating through interstellar space that seed protoplanetary disks to begin with.

"Only particles with a non-spherical shape and a size of 30 microns, which is much larger than the near-infrared wavelength that was used for the observation, can explain the features of our observation," study co-author Yoichi Itoh, of the University of Hyogo in Japan, said in a statement.

The study will be published in the Publications of the Astronomical Observatory of Japan in December.