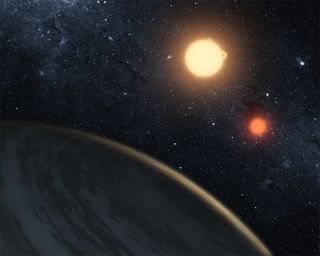 This artist's concept illustrates Kepler-16b, the first planet known to definitively orbit two stars -- a real-life Tatooine, from 'Star Wars.' The planet, which can be seen in the foreground, was discovered by NASA's Kepler mission.
(Image: © NASA/JPL-Caltech)

It's a real-life Tatooine. A spectacle made popular by the "Star Wars" saga — a planet with two suns — has now been confirmed in space for the first time, astronomers revealed.

Scientists using NASA's Kepler space telescope captured details of a giant planet in orbit around the pair of binary stars that make up the Kepler-16 system, which is about 200 light-years away.

"This discovery is stunning," said study co-author Alan Boss at the Carnegie Institute in Washington. "Once again, what used to be science fiction has turned into reality." [See an image and video of Tatooine planet Kepler 16b]

When Tatooine was depicted on film, many scientists doubted that such planets could really exist. Now there's proof.

"It's possible that there's a real Tatooine out there," said John Knoll, visual effects supervisor at the special-effects firm Industrial Light and Magic, which was behind the "Star Wars" films. "Kepler 16b is unambiguous and dramatic proof that planets really do form around binaries."

The new discovery is expanding the bounds of what scientists, as well as filmakers, can conceive, he said.

"Again and again we see that the science is stranger and cooler than fiction," Knoll said during a NASA press conference today. "The very existence of these discoveries gives us cause to dream bigger, to question our assumptions."

The planet, dubbed Kepler-16(AB)-b, passes in front of both stars in view of the satellite, regularly dimming their light. Each star also eclipses its companion as they orbit each other. Altogether, these motions allow scientists to precisely calculate the masses, radii and trajectories of all three bodies.

The newfound planet keeps a distance from its stars nearly three-quarters that of the distance between the Earth and the sun. It is somewhat like Saturn in size, although nearly 50 percent denser, suggesting it is richer in heavy elements. [10 Real Alien Worlds That Could Be In 'Star Wars']

"Kepler-16(AB)-b is not habitable as we know it," said study lead author Laurance Doyle , an astrophysicist at the Search for Extraterrestrial Intelligence (SETI) Institute in Mountain View, Calif.

This alien world travels on a nearly circular 229-day orbit around its two parent stars, Kepler-16A and Kepler-16B, which are about 69 and 20 percent as massive as the sun, respectively. The stars keep  close to each other — only a fifth of the distance between Earth and the sun on average, which is closer than Mercury gets to the sun — completing an orbit around each other every 41 days, researchers added. [Infographic: New Planet is Like "Star Wars'" Tatooine]

Worlds that orbit around two stars, known as circumbinary planets, had been hinted at before. Stars in pairs both orbit around a point in space called barycenter, and researchers at times saw these orbits were slightly off, suggesting the presence of a planet tugging at both stars. However, Kepler-16(AB)-b is the first planet that scientists have detected directly passing in front of, or transiting, its stars, temporarily dimming their light.

Since the movements of this world and its two stars are all virtually confined to the same plane, the researchers suggest they all formed from the same disk of dust and gas. Planets that were captured from other star systems might be expected to orbit at a range of angles.

"Now that we know how to detect circumbinary planets, I think we are going to find a lot more rapidly," Doyle told SPACE.com.

The scientists detailed their findings in the Sept. 16 issue of the journal Science.