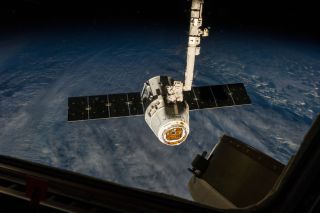 The private spaceflight company SpaceX is planning to launch their fourth official unmanned resupply mission to the International Space Station this week. SpaceX's robotic Dragon capsule is now expected to launch atop the company's Falcon 9 rocket to the orbiting outpost on Saturday (Sept. 20). Dragon was initially expected to launch on Friday (Sept. 19), however, rocket preparations delayed the launch by one day, according to NASA officials.

The launch is now scheduled for Saturday at 1:15 a.m. EDT (0515 Sept. 21 GMT) from Cape Canaveral Air Force Station in Florida. If the rocket launch is postponed, mission controllers have the option to try again the next day at 1:53 a.m. EDT (0553 Sept. 22 GMT), NASA officials said.

SpaceX's capsule will be packed full of more than 5,000 lbs. (2,270 kilograms) of material for the crewmembers onboard the station. This mission — called SpaceX CRS-4 — is expected to deliver the first 3D printer to the space station. It is also carrying a new Earth-observing instrument, ISS-RapidScat that will help forecasters on the ground monitor potentially severe weather from space. [The Rockets and Spaceships of SpaceX (Photos)]