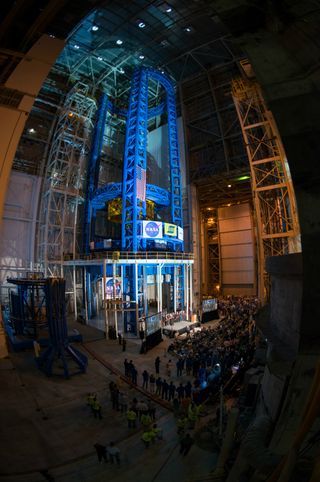 NASA's Vertical Assembly Center in Louisiana is now open for business. The huge tool will be used to weld together pieces of the Space Launch System rocket's core stage.
(Image: © NASA)

NASA has opened the largest spacecraft welding tool on Earth for business with a single mission: to build the most powerful rocket the world has ever seen.

The agency's Vertical Assembly Center — a 170-foot-tall (51.8) welding tool — made its debut in New Orleans, Louisiana on Friday (Sept. 12) after a ribbon cutting ceremony. NASA will use the gigantic facility to weld together the more than 200-foot-tall (61 meters) core stage of the agency's Space Launch System (SLS), a mega rocket designed to take humans deeper into space than ever before.

"This rocket is a game changer in terms of deep space exploration and will launch NASA astronauts to investigate asteroids and explore the surface of Mars while opening new possibilities for science missions, as well,” NASA administrator Charles Bolden said during the ribbon-cutting ceremony today. [See images of NASA's SLS rocket design]

The Vertical Assembly Center will be used with other tools that are currently in production now to put the SLS together. Engineers will weld different pieces of the rocket together and then test them in the facility.

"The SLS Program continues to make significant progress," Todd May, SLS program manager, said in a statement. "The core stage and boosters have both completed critical design review, and NASA recently approved the SLS Program's progression from formulation to development. This is a major milestone for the program and proof the first new design for SLS is mature enough for production."

NASA officials expect that the SLS will be ready for its first flight no later than 2018. In its final configuration, the rocket will stand close to 400 feet tall (122 meters). For its first test flight, however, the rocket is expected to deliver an uncrewed Orion spacecraft beyond low-Earth orbit.

The Orion capsule is designed to take a crew of astronauts to deep space destinations like Mars or an asteroid towed into orbit around the moon. Orion is expected to launch on its first test flight aboard a United Launch Alliance Delta 4 Heavy rocket in December. The capsule is currently being assembled in Florida.

"Nothing about building the first of a brand new space transportation system is easy," Mark Geyer, Orion Program manager, said in another statement. "But the crew module is undoubtedly the most complex component that will fly in December. The pressure vessel, the heat shield, parachute system, avionics -- piecing all of that together into a working spacecraft is an accomplishment. Seeing it fly in three months is going to be amazing."