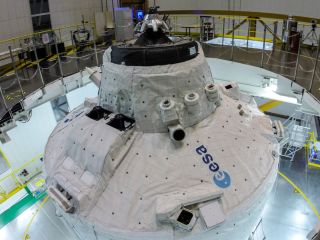 A rocket launch from South America Tuesday evening (July 29) will mark the beginning of the end for a venerable line of European cargo spacecraft.

The European Space Agency's fifth Automated Transfer Vehicle (ATV-5) is scheduled to blast off toward the International Space Station atop an Ariane 5 rocket from French Guiana at 7:47 p.m. EDT (2347 GMT; 8:47 p.m. local time) on Tuesday. You can watch the liftoff live online here at Space.com, courtesy of NASA TV.

The unmanned ATV-5  is the last of Europe's ATV spacecraft line, which has been resupplying the orbiting lab since 2008. [Europe's Final ATV Mission (Video)]

ATV-5 is nicknamed "Georges Lemaitre," after the Belgian priest and astronomer who in 1927 proposed what later came to be called the Big Bang theory of the universe's origin. The 13-ton Georges Lemaitre is further loaded with more than 7 tons of food, scientific experiments and other supplies, making the craft the heaviest vehicle ever to be launched by an Ariane 5, European Space Agency (ESA) officials said.

Georges Lemaitre will take a leisurely route after launch, eventually meeting up with the space station on Aug. 12.

ATV-5 will carry a number of scientific experiments up to the station in addition to more mundane stuff like food, drinking water, spare parts and clothing. One experiment, ESA's "Electromagnetic Levitator," will heat metals to 2,900 degrees Fahrenheit (1,600 degrees Celsius), then cool them down quickly. Studying these processes in microgravity should help scientists better understand the physics underlying atomic arrangement and rearrangement, ESA officials said.

It will doubtless take the six crewmembers of the space station's current Expedition 40 a while to unload all of the gear and supplies aboard Georges Lemaitre. But there's no rush; the cargo vehicle will stay attached to the orbiting lab for about six months, ESA officials said. Georges Lemaitre will then be filled with trash and sent to burn up in Earth's atmosphere.

While the ATV program has nearly reached its end, there are a number of other robotic craft capable of resupplying the space station. Japan's H-II vessel and Russia's Progress spacecraft are still flying, as are two private American vehicles — the Dragon capsule, built by SpaceX, and Orbital Sciences' Cygnus craft.