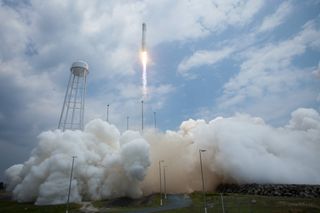 An Antares rocket carrying a Cygnus cargo ship — both built by Orbital Sciences — launched into space from NASA's Wallops Flight Facility on Wallops Island, Virginia, Sunday (July 13). The spacecraft will link up with the International Space Station on Wednesday, July 16.
(Image: © NASA/Bill Ingalls)

A commercial Cygnus cargo ship packed with astronaut food and supplies is expected to arrive at the International Space Station tomorrow morning (July 16).

You can watch the docking live on Space.com, courtesy of NASA TV. The space agency's coverage will start at 5:15 a.m. EDT (0915 GMT). Astronauts aboard the space station are expected to capture the unmanned Orbital Sciences-built Cygnus spacecraft using the orbiting lab's huge robotic arm at about 6:39 a.m. EDT (1039 GMT).

The Cygnus spacecraft  launched into space on Sunday (July 13) from Wallops Island, Virginia, atop an Antares rocket — also built by the Dulles, Virginia-based company Orbital Sciences. The smooth launch came after weeks of delays for the mission. [Gallery: Orbital Sciences' Orb-2 Cargo Mission in Photos]

Cygnus has been playing catch-up with the space station ever since liftoff. The spacecraft was about 2.5 miles (4 kilometers) below the space station and trailing the outpost by 168 miles (270 km) as of 6 p.m. EDT (2200 GMT) on Tuesday,  Orbital Sciences representatives wrote in a Twitter update.

The cylindrical vessel will approach the station from below, stopping when it's about 33 feet (10 meters) away. Then, NASA astronaut Steve Swanson, the space station's current commander, and German astronaut Alexander Gerst, a flight engineer with the European Space Agency, will capture Cygnus with the robotic arm attached to the space station.

Gerst apparently had been practicing his grappling techniques with the Canadian-made robotic limb, known as Canadarm2. On July 11, the astronaut posted a picture of himself at the controls with the accompanying text: "A big moment in an astro's life: after 100s of sims, moving the real #ISS robotic arm for the 1st time. Felt great!"

For about 30 days, the capsule will remain attached to the space station, where astronauts will unload the 3,600 lbs. (1,600 kilograms) of fresh supplies, including food, equipment, hardware and science experiments. Once empty, the vessel will be refilled with astronaut trash and cast off into space, where it will burn off in Earth's atmosphere above the Pacific Ocean.

The mission, paid for by NASA, marks the second trip to the space station by a disposable Cygnus capsule. Since the U.S. space shuttle program ended in 2011, NASA has relied on commercial companies and foreign space agencies to keep the $100 billion station supplied. Orbital Sciences has a $1.9 billion contract with NASA to launch eight cargo missions total through 2016. SpaceX also has a NASA contract, worth $1.6 billion, to send 12 missions to the station using its Dragon capsule.