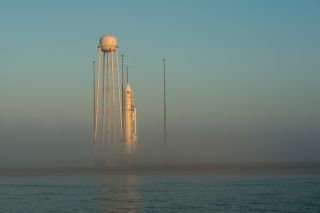 An Antares rocket, built by Orbital Sciences Corp., sits on the Mid-Atlantic Regional Spaceport’s Launch Pad 0A at NASA’s Wallops Flight Facility on July 12, a day before it is scheduled to loft the company's Cygnus spacecraft into orbit.
(Image: © NASA/Bill Ingalls)

WALLOPS ISLAND, Va. — After a series of delays, a robotic spacecraft built by the private company Orbital Sciences is counting down to launch today (July 13) on a mission to deliver experiments and supplies to the astronauts living aboard International Space Station.

You can watch the launch live on Space.com, courtesy of NASA TV. The webcast will begin at 12 p.m. EDT (1600 GMT), and liftoff from the Eastern Shore of Virginia is set for 12:52 p.m. EDT (16:52 GMT). Weather permitting, the huge rocket may be visible over parts of the U.S. East Coast as it streaks out over the Atlantic Ocean.

As tall as a 13-story building, Orbital's Antares rocket will be carrying the company's Cygnus capsule, which is packed with about 3,293 lbs. (1,493.8 kilograms) of cargo, including astronaut food, equipment, science experiments and small satellites. [Gallery: Orbital Sciences' Orb-2 Cargo Mission in Photos]

The launch will be Orbital's second official resupply mission to the space station after a first flight in January and a demonstration flight that brought Cygnus to the orbiting lab in September 2013. Orbital, which is based in Dulles, Virginia, has a $1.9-billion contract with NASA to carry out eight cargo missions through 2016. Elon Musk's SpaceX, the only other commercial company with a NASA resupply contract, has been commissioned to fly 12 missions to the station under a $1.6 billion deal.

"We're real proud to be part of the team that is keeping the station flying and providing the crew with cargo and the research that they need," Frank Culbertson, a former NASA astronaut and Orbital Sciences executive vice president, told reporters in a pre-launch briefing Saturday afternoon (July 12).

The rocket will blast off from a seaside pad operated by the Mid-Atlantic Regional Spaceport, or MARS, at NASA's Wallops Flight Facility on Wallops Island, Virginia.

If all goes according to plan, the Cygnus spacecraft will reach its initial orbit about 10 minutes after launch. Then, the capsule will perform a series of maneuvers to reach the International Space Station by Wednesday morning (July 16). Astronauts living on board the orbiting lab will capture the vessel using a huge robotic arm.

"It's been a little bit of a challenge to get to this point," Culbertson said.

The mission, dubbed Orb-2, was originally scheduled for May. It had been postponed due to conflicts with other launches and technical issues, including the failure of an AJ26 engine — the kind that powers Antares' first stage — during a test at NASA's Stennis Space Center in Mississippi, which prompted an investigation.

Then this week, the mission was repeatedly delayed because stormy weather prevented Orbital's launch team from conducting normal operations to get the rocket ready on the pad. But by Saturday morning (July 12), the gray clouds and fog that had been hanging over the region dissipated. Launch managers are expecting a 90-percent chance of favorable weather for launch on Sunday, with partly cloudy skies and a slight breeze, said Wallops Flight Facility test director Sarah Daugherty.

Launching a rocket from the Eastern Shore on a Sunday during peak summer tourism season poses an interesting set of challenges: crowds of vacationers and boaters. But Daugherty said Wallops officials have made an extra effort to talk to recreational boaters about staying out of the danger zone around the pad.

"We're confident that we can have a clear range for the first second of that five-minute window," Daugherty said.

Unlike SpaceX's Dragon capsule, which is reusable, Cygnus is disposable. Orbital's vessel will be berthed to the space station for about 30 days before it is filled with trash and cast off toward Earth, where it will eventually meet its fiery demise in the atmosphere over the South Pacific.