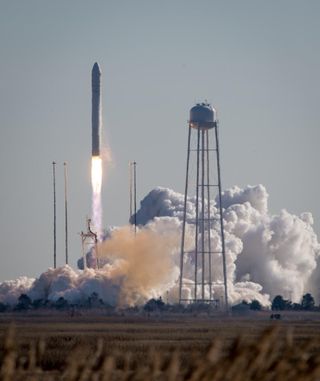 An Orbital-built Cygnus spacecraft launched into space atop the company's Antares rocket from a seaside pad at NASA's Wallops Flight Facility on Wallops Island, Va. Liftoff occurred at 1:07 p.m. EST (1807 GMT) after a series of delays, including a 24-hour slip due to a huge solar flare on Tuesday.

The Cygnus spacecraft is hauling about 2,780 lbs. (1,260 kilograms) of fresh food, clothing, scientific equipment and other gear for astronauts on the International Space Station. The mission, called Orb-1, is the first of at least eight cargo missions Orbital will fly for NASA under a $1.9 billion contract. [See more launch photos of Orbital's 1st Cygnus cargo mission]

The Cygnus spacecraft is due to arrive at the space station early Sunday (Jan. 12), where it will be captured by astronauts using a robotic arm and attached to a station docking port.

Orbital's Cygnus spacecraft are bus-size cylindrical vehicles designed to haul payloads of up to 4,400 lbs. (2,000 kg) to the International Space Station. They include an Orbital-built service module for power and propulsion and a 17-foot-long (5 meters) pressurized compartment built by Italy's Thales Alenia Space.

But Thursday's launch marked Orbital's debut delivery flight to the space station under its NASA contract. The company plans to launch eight missions by 2016, three of them this year, to deliver 40,000 lbs. (20,000 kg) of supplies to the station. NASA also has a $1.6 billion deal with the Hawthorne, Calif.-based SpaceX for 12 delivery missions to the station, two of which have already flown.

"All of us at Orbital believe in developing the capability to fly payloads, spacecraft and rockets into space on a commercial basis," said Frank Culbertson, Orbital's executive vice president, before launch. "We support government customers, private customers and now we are supporting the International Space Station and its research."

Culbertson said Orbital Sciences plans to launch its next cargo mission to the station in May, with a December flight rounding out the year.

Orbital initially planned to launch the Cygnus flight to the station in mid-December, but postponed the mission until January to allow station astronauts time to repair a malfunctioning cooling system. A planned Tuesday launch target was delayed to Wednesday due to extremely cold temperatures, and then pushed back one more day because of radiation concerns related to the giant solar flare on Tuesday.

The Orb-1 Cygnus flight is packed full of new science experiments for the station's six-man crew. Included is a space ant colony (to study how weightlessness affects swarm activity), 33 small cubesat satellites and 23 student-designed experiments. More than 10,000 students from schools across the United States are following the student experiments, NASA officials said.

"There is a boom in the science because of the increased capabilities," Ruttley said.

With the retirement of the U.S. space shuttle fleet in 2011, NASA relies on cargo delivery missions by Orbital Sciences, SpaceX and the space agencies of Russian, Europe and Japan to keep the space station stocked with supplies. On Wednesday, NASA and the Obama administration approved a four-year extension of the International Space Station's lifetime through 2024, so more commercial cargo flights in addition to the 20 provided by SpaceX and Orbital may be needed, agency officials said.

Editor's note: Thursday's Cygnus launch may have been visible to observers along a wide swath of the U.S. East Coast, depending on local weather and viewing conditions. If you captured a photo of the Antares/Cygnus launch today and would like to share it with SPACE.com for a possible story or gallery, send images and comments to: spacephotos@space.com.