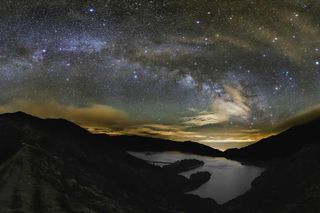 The Milky Way galaxy arcs across the night sky in this magnificent view from the Azores, a chain of nine volcanic islands near Portugal in the Atlantic Ocean.

Astrophotographer Miguel Claro of Lisbon took the image from São Miguel Island in the Azores on April 5.

"One of the islands is São Miguel, where we can find a beautiful lake in the crater center, called Lake of Fire, 'Lagoa do Fogo.' Above it, the sky reveals the magnificent arc of our galaxy, the Milky Way, besides the light pollution coming from Vila Franca do Campo, a small town at the southern shore of the island, that illuminates the clouds near the horizon with the an orange tone," Claro wrote in an email to Space.com. [Amazing Stargazing Photos of May 2014]

Visible from left to right are the Cygnus (Swan) constellation, with its North America nebula (NGC7000) clearly visible below the star Deneb. Down to the right, is the constellation Aquila. Sagittarius is covered by the cloud. Near the right side is Scorpius and its super giant star, Antares. The planet Saturn, meanwhile, is visible along the right edge of the image, in the constellation Libra.