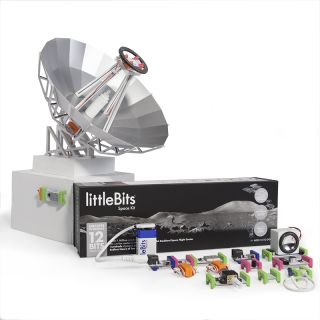 The littleBits Space Kit lets anyone build NASA-approves spacecraft and other designs using special modules and instructions provided in the kit. Image uploaded May 2, 2014.
(Image: © lillteBits )

A new kit lets kids and adults alike perform experiments and build models of real spacecraft, just like the scientists at NASA.

The NASA-approved littleBits Space Kit teaches users how to build a model of a Mars rover, the International Space Station and a variety of scaled-down experiments that scientists use to explore the solar system. The kit comes complete with 12 modules that users can snap together to complete five lesson plans created by the space agency. LittleBits also provides 10 projects modeled after real experiments that NASA scientists and engineers perform every day. You can also watch a video announcing the new space kit.

"The space kit is a collaboration with NASA, in order to make the field of space more accessible, more exciting and more participatory, so that people can understand more about NASA science and experiments," Ayah Bdeir, littleBits founder and CEO, said. [See images taken by NASA's Mars rovers Opportunity and Spirit]

LittleBits' Mars rover — which looks somewhat like NASA's Opportunity rover, which is currently on the Red Planet — takes about two hours to build and involves some extra materials. Users can control the rover remotely, and it can take readings of light sources around a room, and display them as well.

People who buy the kit can also learn more about waves using a spoon, milk and a few snapped-together modules. By taping a spoon filled with a little milk to the littleBits speaker, users can see waves in the milk that correspond to the song being played.

In another project, users study a different kind of wave: light waves. Budding scientists can explore the light spectrum using a CD, white paper, a bright LED and a couple of other pieces that come in the space kit.

"NASA is thrilled to partner with littleBits and bring the power and technology of space to everyone," Blanche Meeson, chief of higher education for NASA's Science and Exploration Directorate at Goddard Space Flight Center, Greenbelt, Maryland, said in a statement. "Through littleBits, anyone will have the opportunity to create, learn and explore like NASA scientists and engineers, but from their home or classroom."

In other experiments, kids and adults can measure the atmosphere from their homes like NASA's AURA satellite does from orbit, build a rudimentary satellite dish, create a star chart and build a "grappler" like the space station's robotic arm.

LittleBits is also making lessons available online to expand the capabilities of the kits, which sell for $189 apiece. A special online lesson allows users to build a model of the space station that can wirelessly receive and play music, according to a littleBits news release.

"Technology and electronics, in particular, are such an important part of everyday life," Bdeir told Space.com. "Our devices, our cars, our houses, everything is really riddled with technology, and yet so many of us don't understand how it works or how to make our own. At littleBits, we want to democratize electronics and hardware and make it as playful and creative a medium as software has become, or as 3D printing has become."

You can learn more about the littleBits Space Kit and purchase it from the company's website: http://www.littlebits.cc/spacekit