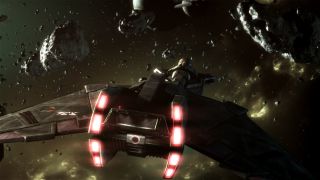 Set phasers to stunned: A Kickstarter campaign for a new "Star Trek" project has already quintupled its original $10,000 goal to fund a fan film by veteran science fiction actors.

The short fan film, called "Star Trek: Prelude To Axanar," takes place decades before the famous exploits of Captain James T. Kirk and his Enterprise crew of "Star Trek" lore and is scheduled to warp into release this May. As of Friday (March 28), the Kickstarter project had raised $58,362, with three days left in the campaign.

What's more, its makers promise "Axanar" will foreshadow the most epic Trekkie fan film ever: a full-length movie with a $250,000 budget that will focus on the Battle of Axanar, which was won by Starfleet captain Garth of Izar about 21 years before the original "Star Trek" series took place. [Watch: "Star Trek: Prelude to Axanar" Kickstarter Video]

"We knew that we needed some sort of trail, or some sort of sizzle, so that people could see what we were capable of doing and being impressed by it," said project lead Alec Peters, who portrayed Garth in the unaffiliated TV web series "Star Trek New Voyages: Phase II", of the decision to make a shorter film first.

The two projects, he says, will mark a new era in the surge of fan-made films and shows made about the "Star Trek" franchise. With heavy participation from science-fiction actors and members from past "Star Trek" production crews, Peters said his project has enough experience, story and graphics to compete with conventional Hollywood films made for millions of dollars.

Peters first became fascinated with Axanar about 25 years ago, after he watched the "Star Trek: The Original Series" third-season episode "Whom Gods Destroy." The episode has Kirk facing off against an irrational and dangerous Garth, who by then was facing mental illness due to a rescue mission.

That story is where Peters and his collaborators are drawing some of their material today, such as a few facts about the battle and that Garth's book was required reading at Starfleet Academy (the training ground for Starfleet officers in the series.)

Peters' interest piqued again after portraying Garth in 2010. He began writing a script and learning what copyright on the "Star Trek" franchise permits. CBS, he said, allows fan productions of "Star Trek" stories to go ahead as long as the fan projects do not make a profit.

"We can't sell DVDs, but we can give them away if you make a donation. That's the full basis of Kickstarter," he said.

Peters then worked on assembling a team. An early break came when Peters approached Richard Hatch, a star in both versions of "Battlestar Galactica" who was Peters' first acting coach 20 years ago. Hatch agreed to be Kharn, the Klingon supreme commander, and other actors quickly followed his lead.

Each actor is working at a discount because they care deeply about the project, Peters added. Peters will reprise the role of Garth in this project.

"Prelude to Axanar" will be a "documentary" focusing on the events of the forthcoming feature film. At about 20 minutes long, the film will be interview-heavy — like a History Channel World War II special about the Battle of Stalingrad or Battle of the Bulge. In this case, the stories will focus on the Battle of Axanar.

"This is meant to be a proof of concept and a dry run," for the bigger film, Peters added, saying that the team hasn't quite decided on when to shoot and release the feature film yet. They're focused right now on preproduction of the "documentary."

In the long run, Peters sees the mock-documentary and film as resume-boosters for his team. Another highlight, he added, will be the visual effects created by fellow "Star Trek New Voyages: Phase II" veteran Tobias Richter.

"I hope people will take notice of this and say, 'They did this for a quarter million dollars?'," Peters said.

"We all work in the industry and we all want to improve our resume. We're trying to create something that’s groundbreaking, that people will be fascinated by, when it's all done."

To can learn more about the "Star Trek: Prelude To Axanar" Kickstarter, visit: https://www.kickstarter.com/projects/194429923/star-trek-prelude-to-axanar