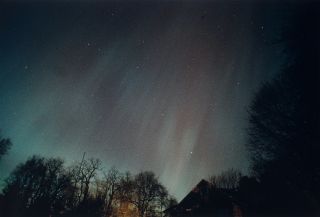 Twenty-five years ago this week, one of the most spectacular displays of the aurora borealis, popularly referred to as the "northern lights," lit up the sky across much of North America.

The amazing spectacle was attributed to a spectacularly large sunspot that slowly came into view on the east limb of the sun on March 5, 1989. Covering an area equal to roughly 3,000 millionths of the solar disk, it was the largest spot that had ever been seen at so high a northern latitude on the sun.

The very next day, this mammoth sunspot produced a major solar flare, ranked as an X15; it was one of the most intense flares ever recorded, and was so powerful that it saturated the detectors on the GOES satellite that recorded the event. [See 25 Years Ago: Amazing Auroras from 1989's Great Solar Storm (Gallery).]

Subatomic particles from such a large flare are shot out into space like a sharp stream from a garden hose. If that stream is directed toward Earth the particles from the sun clash with molecules and atoms of the Earth's atmosphere. These atoms are temporarily stripped of some of their electrons by the collision or near collision. The atoms absorb energy in the process and within a millionth of a second they regain their lost electrons and re-emit this energy in the form of light of various colors.

Unfortunately, having just come around the sun's limb the day before, the subatomic material from the X15 flare was not "geo-effective," that is, the stream missed the Earth. But the big sunspot had other surprises in store. [Photos: Sunspots on Earth's Closest Star]

At 2 p.m. EST on March 10, another major flare erupted — an X8 — a rare type of flare in that it was easily visible as a flash of white light within the dark sunspot. What was more important was that this flare was close to the sun's central meridian, meaning that its sharp stream of energetic particles was aimed directly at the Earth.

At 1 a.m. EST on March 13, the first wave of subatomic particles arrived at the Earth's magnetic poles, producing an incredible northern lights display that lasted almost two days. The show was not constant, but seemed to ebb and flow in intensity. So potent was the blast of particles emitted from the X8 flare that it pushed the aurora zone of visibility — usually confined to central and northern Canada — as far south as Honduras and the Caribbean island of Dominica. (Auroras are seen there, on average, only once in a thousand nights.)

The accompanying geomagnetic storm was so strong that on that same day it caused a surge on the Quebec power grid and knocked out electricity across the entire Canadian province.

I was living in Levittown, N.Y., when my phone rang shortly after midnight on the morning of March 13.  An acquaintance who lived in Boonton, N.J., called to alert me that he thought he might be looking at an aurora low on the northern horizon.

"I apologize for calling so late," he said, "but there's an odd glow that I’m seeing and I’m not quite sure what it is. I think it might be an aurora that's beginning and you might want to check it out."

Bleary eyed (my wife Renate and I were asleep when the call came), I raised the blinds on my bedroom window, which conveniently faced due north. I immediately noticed a strange glow near the horizon as well. I then decided to call my friend Sam Storch (an assiduous amateur astronomer) who lived in the nearby town of North Merrick, and asked him to check his northern sky; he too confirmed that there was something out there quite unlike the typical pinkish haze caused by local streetlights.

Suddenly, and without any warning, the amorphous horizon glow mushroomed to cover the entire northern sky with a brilliant greenish hue. We (Renate and I, as well as Sam and his wife) started screaming: "LOOK AT THAT!!! I DON'T BELIEVE IT!!!"

Then, realizing that the view would be even better if we were outside, Renate and I quickly threw on our winter coats and ran into our backyard where we gasped at an incredible display of light and color now covering more than three-quarters of the sky. Within a few minutes the diffuse forms were replaced by sharply defined red rays, first in the south, and later spreading through the east and west into the north. The peak occurred between 1 and 3 a.m. when waves of pulsating light at times mounted up to the point directly overhead. [Aurora Guide: How the Northern Lights Work (Infographic)]

The aurora persisted through the dawn twilight and was amazingly still going strong nationwide when the sun set later that evening. Brilliant red rays graced the skies over New Orleans, causing local TV and radio stations to break into their regular programing to alert people of a celestial show rarely seen from the Gulf Coast.

Perhaps the most unusual aurora story involved the Amarillo, Texas, fire department. As darkness fell, townspeople reported a mysterious bright red glow in the northern sky. Thinking that the glow was perhaps caused by a large wildfire in the vicinity of the Canadian River about 30 miles (48 kilometers) to the north, fire trucks were sent to investigate only to discover later what the mysterious ruddy glow really was.

And the Quebec Blackout was by no means a local event. New York Power lost 150 megawatts the moment the Quebec power grid went down. The New England Power Pool lost 1,410 megawatts at about the same time. Service to 96 electrical utilities in New England was interrupted while other reserves of electrical power were brought online. Luckily, the United States had the power to spare at the time, but just barely. Across the country from coast to coast, over 200 power grid problems erupted within minutes of the start of the March 13 storm. Fortunately none of these caused a blackout.

Could it happen again?

Currently we are in solar cycle 24, the 24th solar cycle dating back to 1755. So far, cycle 24 has been one of the weakest and least active since 1906. While the next solar maximum — which might still happen this year — might not produce unusual geomagnetic activity such as in 1989, there is still a need to develop strategies for coping with the terrestrial damage that another intensely potent solar flare could inflict.

In 2008, the National Academy of Sciences released a study that broadly addressed many of the socioeconomic ramifications of space storms. "There's been no other report like this for space weather," according to Daniel Baker, a space physicist at the University of Colorado at Boulder's Laboratory for Atmospheric and Space Physics (LASP). "And what we found was that space weather affects many industries in some surprising ways."

The chances of a truly devastating power outage from space weather remain low, the report says. But should one occur, it warns, modern society's dependence on electrical power to maintain everything from banking systems to potable water supplies could indeed cause a national — if not international — emergency costing trillions of dollars during years of recovery.

I’ll close here with a quote by the late solar observer, Herbert Luft. Herb kept tabs on the sun for nearly 70 years, starting as a young man in pre-war Germany, then on to South America and finally to the United States where he and his wife Hilde eventually settled. I knew Herb personally and sometimes watched as he made his daily sunspot observation using a relatively small (54 mm) refracting telescope. Herb would often say: "I'm only here to observe, not to predict!" After nearly seven decades of watching the sun, his mantra was simple:

"You never know from one day to the next, what the sun might do."