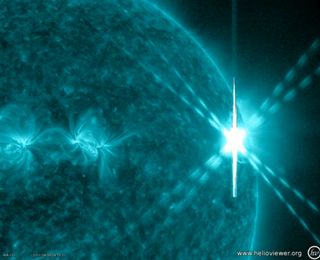 This still from a video taken by NASA's Solar Dynamics Observatory shows the Aug. 8, 2011 solar flare as it appeared in the ultraviolet range of the light spectrum. The flare registered as an X6.9 class sun storm, the largest of the Solar Cycle 24.
(Image: © NASA/SDO/GSFC)

SAN FRANCISCO — The sun's current space-weather cycle is the most anemic in 100 years, scientists say.

Our star is now at "solar maximum," the peak phase of its 11-year activity cycle. But this solar max is weak, and the overall current cycle, known as Solar Cycle 24, conjures up comparisons to the famously feeble Solar Cycle 14 in the early 1900s, researchers said.

"None of us alive have ever seen such a weak cycle. So we will learn something," Leif Svalgaard of Stanford University told reporters here today (Dec. 11) at the annual meeting of the American Geophysical Union. [Solar Max: Amazing Sun Storm Photos of 2013]

The learning has already begun. For example, scientists think they know why the solar storms that have erupted during Solar Cycle 24 have caused relatively few problems here on Earth.

But such effects have rarely been seen during Solar Cycle 24, even though the total number of CMEs hasn't dropped off much, if at all. The explanation, researchers said, lies in the reduced pressure currently present in the heliosphere, the enormous bubble of charged particles and magnetic fields that the sun puffs out around itself.

This lower pressure has allowed CMEs to expand greatly as they cruise through space, said Nat Gopalswamy of NASA's Goddard Space Flight Center in Greenbelt, Md. Indeed, Solar Cycle 24 CMEs are, on average, 38 percent bigger than those measured during the last cycle — a difference with real consequences for folks here on Earth.

"When the CMEs expand more, the magnetic field inside the CMEs has lower strength," Gopalswamy said. "So when you have lower-strength magnetic fields, then they cause milder geomagnetic storms."

Scientists also think they know why relatively few super-fast solar energetic particles, or SEPS, have been measured in Earth's neighborhood during the current cycle, which began in early 2008. It has to do with a weakened interplanetary magnetic field, another characteristic of Solar Cycle 24, they say.

Large SEP events, which can pose a danger to astronauts in Earth orbit, are created by the shock waves driven by CMEs. But fewer of these particles are getting accelerated by such shocks these days, said Joe Giacalone of the University of Arizona.

"When the magnetic field is weaker, the particles are not trapped near the shock as effectively," Giacalone said. "They're going much farther upstream and downstream of the shock wave, and it takes a lot longer for them to get to very high energies."

The strength or weakness of a solar cycle appears to be driven by the intensity of the sun's polar magnetic field during the previous cycle. The polar field is thought to feed the sunspots— dark and relatively cool patches on the sun that are the source of CMEs and solar flares — that come in during the next cycle, Gopalswamy said.