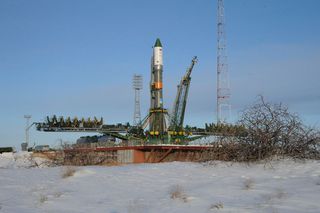 A robotic Russian cargo ship will make an express delivery to the International Space Station today (Feb. 5) and you can watch the launch live online.

The unmanned Progress 54 spacecraft is due to lift off atop a Soyuz rocket at 11:23 a.m. EST (1623 GMT) carrying more than 2.5 tons of supplies for the six-man crew currently living on the space station. The mission will launch from Baikonur Cosomdrome in Kazakhstan, where the local time will be 10:23 p.m., NASA officials said.

You can watch the Progress 54 cargo ship launch live on Space.com, courtesy of NASA TV. The launch webcast will begin at 11 a.m. EST (1600 GMT). It is expected to be bitterly cold at the launch site, where temperatures reached minus 17 degrees Fahrenheit (minus 27 degrees Celsius) on Monday, when the Soyuz rocket rolled out to the launch pad.

The Progress 54 spacecraft will fly on an accelerated four-orbit trip to the space station after launch. The cargo ship is expected to arrive at the station about six hours after liftoff, at about 5:25 p.m. EST (2225 GMT). [How Russia's Progress Spacecraft Work (Infographic)]

Russia's three-module Progress spacecraft are similar in appearance to the country's manned Soyuz space capsules. But Progress vehicles have a propellant capsule in place of the crew-carrying return capsule on the Soyuz spacecraft. Unmanned cargo ships built by Europe, Japan and the private U.S. spaceflight companies SpaceX and Orbital Sciences Corp. also keep the station stocked with supplies.

For today's launch, the Progress 54 spacecraft is packed with 2,897 pounds (1,314 kilograms) of spare parts, 1,764 pounds (800 kg) of propellant, 926 pounds (420 kg) of water and 110 pounds (50 kg) of oxygen, according to a NASA description. Russian cosmonauts Oleg Kotov — who commands the station's Expedition 38 crew — and Sergey Ryazanskiy will watch over the Progress 54 spacecraft's automated docking and will be prepared to take remote control of the ship if needed.

The new cargo ship will dock at the Russian-built Pirs docking port on the Earth-facing side of the International Space Station. Its arrival will come two days after the departure of an older cargo ship, Progress 52, from the same docking port.