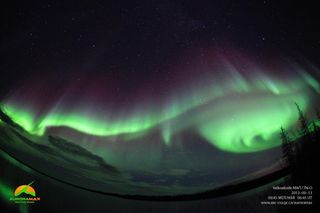 An aurora is photographed by the Auroramax automated camera in Canada's Northwest Territories on Sept. 13, 2013.
(Image: © Auroramax)

Scientists have discovered the powerhouse for the cosmic storms in Earth's magnetic field that fuel the planet's dazzling displays of northern lights.

The discovery could help scientists predict when stormy space weather could disrupt global power systems or expose astronauts to deadly radiation bursts, as well as add insight into the spectacular auroras over the Earth's polar regions.

"We finally found out where the energy comes from that powers the aurora in the space weather," said study co-author Vassilis Angelopoulos, a space physicist at the University of California at Los Angeles. [Northern Lights: Amazing Aurora Photos of 2013]

Solar wind streams plasma and particles from the sun at speeds of up to 1 million mph (1.6 million kilometers per hour), Angelopoulos said. The solar wind deforms the Earth's magnetic field, compressing it on the sunward side and creating the long magnetotail that stretches out from behind the Earth's night side. During solar storms, huge amounts of high energy particles are hurled into Earth's magnetic field.

Some of that energy is then transferred to the Earth's magnetic field, where it is discharged in magnetic storms, which are responsible for the glowing light shows of the aurora borealis, or the northern lights, in the Northern Hemisphere. Auroras over the Southern Hemisphere are called the southern lights, or aurora australis.

"Those can be so intense at times of storms that they light up the entire night sky all the way down south to Hawaii," Angelopoulous told SPACE.com.

But these magnetic storms aren't just pretty lights: They produce bursts of radiation that can threaten satellites in orbit, as well as astronauts. They also dump huge surges of energy into the atmosphere, which can disrupt power supply lines or satellites.

A huge solar storm in 1859, called the Carrington Event, knocked out most of the world's telegraphic system. Predicting those storms is therefore a top priority for space physicists.

As part of the THEMIS mission, five NASA spacecraft have been traveling through Earth's magnetic field and orbiting the moon, measuring changes in the plasma, electric and magnetic fields.

Two of those probes, have been orbiting the moon as part of an extended mission called ARTEMIS. Those measurements revealed where streams of energy were coming from in solar storm events.

It turned out that, though Earth's magnetic field stretches thousands of miles, the energy from the solar wind was being stored in a fairly small part of the magnetic tail that stretches behind Earth's night side.

That stream of wind strengthens the magnetic field until it can't store any more energy, at which point it releases the energy in a violent burst, like a short-circuit, in the form of geomagnetic storms, said David Sibeck, a THEMIS project scientist and magnetospheric physicist who works at NASA Goddard Spaceflight Center, but was not involved in this study.

The results show that "even teeny tiny microphysics and very localized processes can have consequences for the whole environment of Earth," Sibeck told SPACE.com

Now that scientists know where these turbulent storms happen, the next step is trying to get a better picture of when they happen.

"We want to understand how frequent they are, under what solar wind conditions do they wax and wane," Angelopoulous said.

To do that, scientists need to launch tiny space weather stations, using miniature sensors on cubesats to track storm fronts as they pass by, he said.