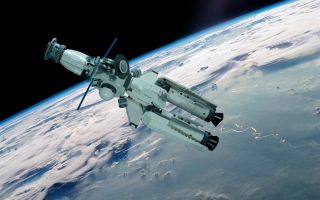 4) The Lego sculpture "Sunbeam," for a contest run in conjunction with NASA, took the grand prize in the "Imagining Our Future Beyond Earth" category. It is a proposed satellite designed to study the outer corona of the sun.
(Image: © Composite by NASA/Maria Werries)

Designed to gaze at the sun, a proposed satellite called "Sunbeam" has the usual radio dishes and rocket engines you would expect of a spacecraft. The difference between it and other orbiting craft? It is entirely constructed of LEGO bricks.

Sunbeam was one of the winning student designs picked out of a NASA design contest  this summer in conjunction with The LEGO Group, a Danish company that is world-famous for its tiny construction bricks aimed at stimulating children's imaginations.

The contest invited budding aerospace engineers, generally ranging in age from elementary to high school, to submit their ideas for space or aerospace designs that could be used in the future. [See more NASA LEGO contest photos, and LEGO blocks in space]

"Our intention was to unleash everyone's creativity and inspire participants to combine real NASA research with imaginative flights of fancy," said astronaut Leland Melvin, who is now NASA's associate administrator for education, in a statement.

"Looking at the winning designs, it's clear we did just that," Melvin added.

"Sunbeam," which was designed by Jay Semlis from England, took the grand prize in the "Imagining Our Future Beyond Earth" category. NASA said the satellite is intended to look at the sun's outer corona, or the envelope of gas surrounding the sun that is most easily visible during solar eclipses.

Runners-up in the category included "The ORACOM," a Mars spacecraft made by the United States' Sergio Parra, and "Asteroid Initiative," an idea to pick up and move asteroids by Peter Hollander, also from the United States. NASA has an initiative before Congress to robotically capture an asteroid and tow it near the moon so astronauts can study its properties.

The overall (age 13 and above) winner was Sweden's Claes Sundstrom, whose "Hydrogen Powered Regional Airliner" used a hybrid wing body and hydrogen-fueled, turboelectric engines. The design is intended to cut down on noise, fuel usage and emissions.

In the young student builders (age 13-18) group, the winner was a firefighting airplane called  "Flying Extinguisher 4000 'Fish Eagle;' An Aerial Firefighter of the Future," built by William Nodvik from the United States.

The winners will get a LEGO trophy and a gift package from NASA that includes a crew patch from one of Melvin's shuttle missions. Melvin flew on STS-122 in 2008 and STS-129 in 2009.