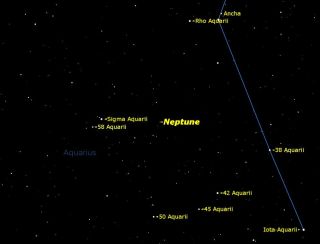 The planet Neptune reaches opposition this week and you can catch live telescope views of the blue gas giant planet tonight (Aug. 26) in a special hour-long webcast.

When a planet is in opposition, it lies directly opposite the sun in Earth's sky. It is highest in the sky when the sun is lowest, which is local midnight. When Daylight Saving Time is in effect, this is close to 1 a.m. local time. For Neptune, this orbital milestone will occur on Tuesday (Aug. 27).

You can see live views of Neptune on SPACE.com tonight here in a free one-hour webcast from the online skywatching website Slooh Space Camera. The webcast will begin at 10 p.m. EDT (0200 Aug. 27 GMT) and feature views of Neptune from Slooh's remote-operated observatory in the Canary Islands, off the west coast of Africa. [Photos of Neptune, the Mysterious Blue Planet]

'With the recent finding of yet another new moon around this world, and with its intriguing orbit that causes it to complete three circuits around the sun in the exact same time that Pluto makes two, this Ice Giant is a place that deserves our periodic focus," astronomer Bob Berman, who will participate in the Slooh webcast, said in a statement. "What better occasion than this Monday night line-up, when it ventures to its closest to Earth of 2013? Indeed, it hasn't been this near to us in more than a half century!"

As planets go, Neptune is extremely dim, requiring at least a good set of binoculars to become visible. Even in a powerful telescope, it is a tiny blue-green disk with no detail to be seen. Unless you look carefully, you could easily mistake it for a star.

In fact, that happened several times before Neptune's official discovery. Most famously, the 17th century astronomer Galileo Galilee observed Neptune twice while studying Jupiter’s moons in 1612 and 1613, but mistook it for a star both times.

After the discovery of Uranus by William Herschel in 1781, mathematicians calculated the possible location of another planet farther from the sun, but no one looked seriously for it until 1846. The first to actually spot it was German astronomer Johann Gottfried Galle on September 23.

Because it takes Neptune 164 years to circle the sun, it spends an awfully long time in any one constellation. For example, Neptune has been in Aquarius since January 24 2011 and won’t move on into Pisces until May 22 2022. In fact, it has only just completed its first trip around the sun since its discovery, and is again very close to the spot where it was discovered.

Since Neptune is so far from the Earth, it presents too small a disk to be studied well with even the largest telescopes. The only good view we’ve ever gotten of Neptune was in 1989 when the Voyager 2 probe passed within 2740 miles (4400 km.) of Neptune’s cloud tops. At that time it recorded two large blue spots in Neptune’s atmosphere, apparently similar to the Great Red Spot on Jupiter. Voyager 2 also confirmed the existence of a faint ring around Neptune, a ghostly echo of Saturn’s ring system.