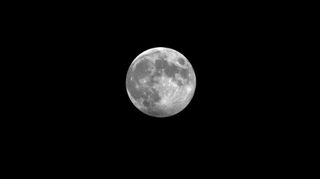 North America will be well positioned to see a lunar eclipse late tonight (May 24), but it might not be worth waiting up for.

During this penumbral lunar eclipse, the moon will only pass into the Earth’s outer shadow — the penumbra — which is much fainter and more diffuse compared with the much sharper and darker shadow known as the umbra.

Slightest of the slight

This time, however, there will be no interaction with the umbra; the moon will only pass into the penumbral shadow.

This is not to say that a penumbral lunar eclipse is usually not noticeable. In fact, in those cases when as much as two-thirds or more of the moon becomes immersed in the penumbra, a distinct, albeit faint, shading appears on the moon’s face. This usually appears to the naked eye or in binoculars and telescopes as gray or brownish "smudge" similar to a tarnishing of the moon’s disk.

But not even that type of dim vestige will be in evidence tonight. In fact, the passage of the moon’s disk into the Earth’s shadow will result in one of the slightest eclipses of all, administering a mere touch of penumbral shadow at the southernmost part of the lunar limb at 12:11 a.m. EDT on Friday (0411 May 25 GMT).

This is the point of greatest eclipse, where the penumbral magnitude will only reach 1.57 percent; the penumbral shadow will be in contact with the moon for only a little more than 33 minutes.

It will thus be impossible to notice anything out of the ordinary concerning the moon's overall appearance. It will, in fact look like any other full moon.

So if we can’t see it, why bother even including it in the listing of this year’s eclipses? To quote the well-known Belgian eclipse calculator, Jean Meeus, the mention of such a slight and undistinguishable event such as this is done, "… only for reason of completeness; the statistics of eclipses would be incomplete without them."

No big deal for an astronaut!

Interestingly, eclipses of the moon for us here on Earth, are eclipses of the sun as seen from the moon. An astronaut looking skyward would see the Earth — appearing as a dark disk nearly four times larger than the moon would look for us — passing in front of the sun. But in order to see tonight’s solar eclipse from the moon, an astronaut would have to be positioned at the moon’s South Pole.

There, for about a half hour, with the sun sitting just above the lunar horizon, the dark edge of the Earth would appear to barely scrape the edge of the sun. Of course, with practically the entire sun remaining in view, our hypothetical astronaut would notice absolutely no sensible dimming or darkening of the surrounding lunar landscape.

Which is why no matter how hard you try, you won't notice any kind of darkening of the moon tonight.

The next lunar eclipse is scheduled for Oct. 18 and once again it will only be a penumbral eclipse. You might have a chance in getting a glimpse of that event, however, because more than 75 percent of the moon will become immersed in the Earth’s outer shadow and those living across the eastern half of North America might just see some evidence of this faint penumbral shading soon after local moonrise.

Less than a year from now, on the night of April 14 and 15 in 2014, the moon will undergo a total eclipse and North Americans will have a ringside seat for that event as it will occur high in the sky in the middle of the night.  And if it's clear where you live, I promise you’ll definitely see something that night!

Editor's note: If you snap a picture of the lackluster lunar eclipse tonight and view that you'd like to share for a possible story or image gallery, send photos, comments and your name and location to Managing Editor Tariq Malik at spacephotos@space.com.

Joe Rao serves as an instructor and guest lecturer at New York's Hayden Planetarium. He writes about astronomy for The New York Times and other publications, and he is also an on-camera meteorologist for News 12 Westchester, New York. Follow us on Twitter, Facebookand Google+. Original article on SPACE.com.