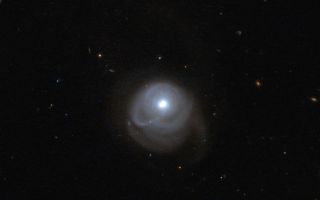 This intriguing space wallpaper shows the galaxy catalogued as 2MASX J05210136-2521450, which stands out at a glance due to its interesting shape.
(Image: © ESA/Hubble & NASA Acknowledgement: Luca Limatola)

This intriguing space wallpaper shows the galaxy catalogued as 2MASX J05210136-2521450, which stands out at a glance due to its interesting shape. The object is an ultraluminous infrared galaxy, which emits a tremendous amount of light at infrared wavelengths. Scientists connect this to intense star formation activity, triggered by a collision between two interacting galaxies. The merging process has left its signs: 2MASX J05210136-2521450 presents a single, bright nucleus and a spectacular outer structure that consists of a one-sided extension of the inner arms, with a tidal tail heading in the opposite direction, formed from material ripped out from the merging galaxies by gravitational forces. This image was released May 6, 2013.