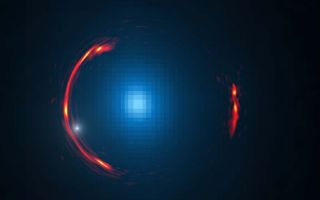 Long ago Albert Einstein predicted a gravitational lensing effect of light from one object by the mass of another object. In this image the mass of one, nearer galaxy, shown in blue, distorts the light from another more distant but aligned galaxy, shown in red. Also, an unknown dwarf planet, shown as a white dot on the left side, comes into focus because of the lensing effect as well. [Learn more about Einstein's Theory of Relativity]