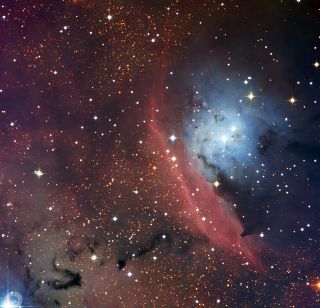 An interstellar cloud of dust called NGC 6559 shines brightly 5,000 light-years away from the Earth in this photo taken by a telescope in Chile. Released May 2, 2013.
(Image: © ESO)

An amazing new photo from a telescope in Chile reveals a cloud of star-producing gas and dust glowing brightly 5,000 light-years from Earth.

The new image, unveiled today (May 2) by the European Southern Observatory, shows the cosmic wonder NGC 6559, gaseous nebula in the constellation Sagittarius. Hot, young stars are forming from the gas and dust inside the interstellar cloud.

ESO scientists used observations from a telescope atop Chile's high Atacama Desert to create a video tour of the nebula NGC 6559 in addition to the new image.

"The gas in the clouds of NGC 6559, mainly hydrogen, is the raw material for star formation," ESO officials wrote in a statement "When a region inside this nebula gathers enough matter, it starts to collapse under its own gravity. The center of the cloud grows ever denser and hotter, until thermonuclear fusion begins and a star is born. The hydrogen atoms combine to form helium atoms, releasing energy that makes the star shine."

The two colors of the cloud represent a pair of nebulas. Once the young stars are born, they "energize" the hydrogen surrounding them, ESO officials said. The gas then creates the red wispy cloud — known to astronomers as an "emission nebula" — in the center of the image.

The blue section of the photo — representing a "reflection nebula" — shows light from the newly formed stars in the cosmic nursery being reflected in all directions by the particles of dust made of iron, carbon, silicon and other elements in the interstellar cloud.

The new photo of this star-forming region of the universe also hides other celestial surprises.

"In regions where it is very dense, the dust completely blocks the light behind it, as is the case for the dark isolated patches and sinuous lanes to the bottom left-hand side and right-hand side of the image," ESO officials wrote.

Astronomers used the 5-foot (1.54 meters) Danish Telescope at the La Silla Observatory in Chile to image the interstellar cloud.

Fifteen countries make up the European Southern Observatory project. It is considered the most productive ground-based astronomical observatory in the world, officials said.