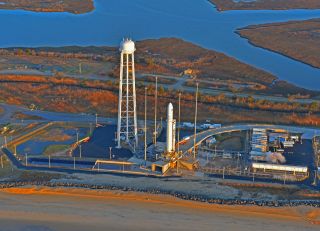 WALLOPS ISLAND, Va. — An American company hired by NASA to fly robotic cargo ships to the International Space Station may try to launch the maiden test flight of its new rocket on Friday (April 19), two days after a last-minute glitch thwarted a first attempt.

The Dulles-based company Orbital Sciences Corp. initially tried to launch the new Antares rocket from a seaside pad here at NASA's Wallops Flight Facility on Wednesday (April 17), but called off the attempt when a data cable that relays commands to the rocket's onboard computer popped loose from the booster 10 minutes before liftoff.

"We are still examining all of the data, but it appears that the issue is fairly straightforward," Orbital executive vice president Frank Culbertson, a former astronaut and head of Orbital's advanced programs group, said in a statement Wednesday. "With this being the first launch of the new system from a new launch facility we have taken prudent steps to ensure a safe and successful outcome. Today, our scrub procedures were exercised and worked as planned. We are looking forward to a successful launch on Friday." [See photos of Orbital's Antares rocket test]

"If the weather is cooperating and we've resolved all the problems, then we're going to go ahead and try to launch on Friday," Culbertson told reporters after Wednesday's launch attempt. The company would target a 5 p.m. EDT (2100 GMT) launch on Friday, if all goes well, he added.

Orbital's 13-story Antares rocket is the go-to booster for the company's new Cygnus spacecraft, an unmanned cargo carrier that the company will use to fly at least eight delivery missions to the International Space Station under a $1.9 billion deal with NASA. Orbital Sciences is one of two companies with a commercial cargo delivery contract with NASA.

The other firm is the Hawthorne, Calif.-based Space Exploration Technologies (SpaceX), which has launched one test flight and two cargo trips to the station since 2012 using its Falcon 9 rockets and  Dragon spacecraft. SpaceX has a $1.6 billion deal with NASA to provide 12 cargo missions with its Falcon and Dragon vehicles.

During Wednesday's launch attempt , the umbilical data cable prematurely separated from its housing on the Antares rocket's second stage, severing a vital data link between Orbital's launch control center and the rocket's computer brain, which is housed in the second stage, Culbertson said. The Ethernet cable is one of several umbilical lines that provide external power and connect the rocket's systems with ground controllers to monitor the health of the booster.

"Like the back of your stereo, it has all these cords coming out," Culbertson said.

Orbital's launch control team  had already worked a series of issues, including a dicey weather forecast, before the Ethernet cable glitch popped up. Before the launch try, the company and NASA officials stressed that this was a test flight and things could go wrong.

"If anybody things rocket science is not hard, they are dead wrong. So many thousands of things have to work right, " Alan Lindenmoyer, NASA's commercial crew and cargo program manager, told reporters.  "Not only is this a test of the vehicle, this is  a test of the team."

It is also a test of the launch pad. Orbital'sAntares rocket is launching from the new Pad 0A at the Mid-Atlantic Regional Spaceport, a commercial launch site based at the Wallops Flight Facility that is overseen by the Virginia Commercial Spaceflight Authority. The launch pad is a brand-new launching site and was turned over to Orbital Sciences by spaceport officials in October.

The Antares rocket is the largest booster ever to launch from NASA's Wallops Flight Facility. The facility was first established in 1945 as an aeronautical research center and has long served as NASA's base for small sounding rocket launches and balloon research programs.

If Orbital's Antares rocket does launch on Friday, there is a possibility that observers could see the space shot from locations all along the U.S. East Coast. Viewing maps released by NASA and Orbital Sciences suggest that the rocket's launch could be visible from points as far north as Portland, Maine, and as far south as Charleston, S.C.

NASA will provide a live broadcast of the Antares rocket launch online and via its NASA TV channel beginning at 4:30 p.m. EDT (2030 GMT) if a Friday attempt goes forward. You can watch the Antares launch webcast live here at SPACE.com, courtesy of NASA.