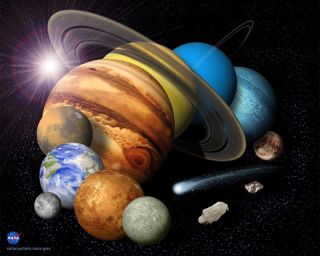 Unmanned spacecraft from NASA, Europe and other space agencies are exploring the moon, Mars and other destinations across the solar system.
(Image: © NASA)

Nearly 2,000 scientists have converged in Texas this week to reveal the latest discoveries on the moon, Mars and other destinations across the solar system.

The gathering marks the start of the Lunar and Planetary Science Conference in The Woodlands, Texas, near Houston, an annual conference to discuss new discoveries by scientists and unmanned spacecraft.

"This is the premiere conference for planetary scientists, and has been a significant focal point for planetary science research since its beginning in 1970, when it was known as the Apollo 11 Lunar Science Conference," officials with the Lunar and Planetary Institute of Houston said in a statement. The institute organizes the five-day conference each year.

"Presentations will include recent science findings from the rover Curiosity on Mars, and an update on NASA's Gravity Recovery and Interior Laboratory (GRAIL) and Lunar Reconnaissance Orbiter missions," NASA officials said in an announcement.

NASA will webcast two press conferences on Monday and Tuesday (March 18 and 19) to discuss the Curiosity rover's Mars discoveries and the Grail moon probes. Today's press conference begins at 1 p.m. EDT (1700 GMT) and will focus on the Curiosity rover, which has confirmed that Mars was habitable for microbial life in the ancient past. NASA unveiled that discovery last week.

You can watch the Curiosity press conference live on SPACE.com here, courtesy of NASA and the Lunar and Planetary Institute. Curiosity landed on Mars in August to begin a two-year primary mission to determine if Mars could have ever supported life. The rover accomplished that goal in just seven months, NASA officials said.

On Tuesday, NASA will hold another press conference at 1 p.m. EDT to discuss the Grail mission to map the moon's gravity. The two Grail spacecraft launched 2011 and orbited the moon together in order to measure the lunar gravitational field with unprecedented detail. The probes completed their mission last year, ending the expedition with spectacular back-to-back crashes into the lunar surface.

The conference will also include updates on the latest planetary science discoveries by scientists around the world, as well potential future missions to explore the solar system by NASA and other space agencies.

Visit SPACE.com each day this week for news from the 44th Lunar and Planetary Science Conference.